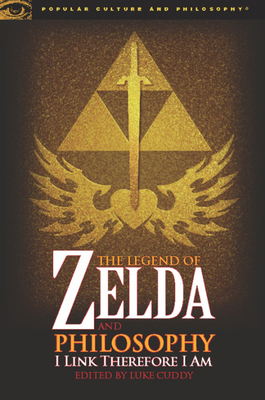 This is book number 36 in the Popular Culture and Philosophy series.

With both young and adult gamers as loyal fans, The Legend of Zelda is one of the most beloved video game series ever created. The contributors to this volume consider the following questions and more: What is the nature of the gamer's connection to Link? Does Link have a will, or do gamers project their wills onto him? How does the gamer experience the game? Do the rules of logic apply in the game world? How is space created and distributed in Hyrule (the fictional land in which the game takes place)? How does time function? Is Zelda art? Can Hyrule be seen as an ideal society? Can the game be enjoyable without winning? The Legend of Zelda and Philosophy not only appeals to Zelda fans and philosophers but also puts video games on the philosophical map as a serious area of study.

If you're a Zelda theorist, chances are you already have this book or plan to run out and buy it. If you're just dipping your feet into Zelda at a higher level of thought, The Legend of Zelda and Philosophy offers a great starting point with interesting insights into both Zelda and gaming as a whole.... A true Zelda fan shouldn't be without it. - ZeldaUniverse.net, March 27, 2009