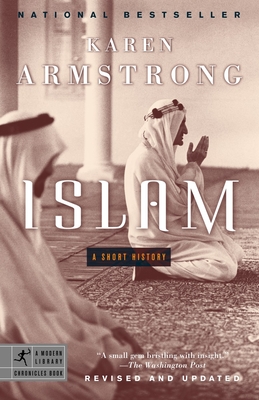 
On Our Shelves Now at:
No religion in the modern world is as feared and misunderstood as Islam. It haunts the popular imagination as an extreme faith that promotes terrorism, authoritarian government, female oppression, and civil war. In a vital revision of this narrow view of Islam and a distillation of years of thinking and writing about the subject, Karen Armstrong’s short history demonstrates that the world’s fastest-growing faith is a much more complex phenomenon than its modern fundamentalist strain might suggest.
Karen Armstrong is one of the world’s foremost scholars on religious affairs. She is the author of a number of bestselling books, including The Battle for God, Buddha, Jerusalem, A History of God, and Through the Narrow Gate, a memoir of her seven years as a nun. She lives in London.
“A small gem bristling with insight.” —The Washington Post

“A valuable corrective to the hostile caricatures of Islam that circulate in the English-speaking world. . . . Engaging and provocative.” —The New York Times

“Karen Armstrong, a respected and popular author of several books about religion . . . takes on a useful and formidable task in presenting the history of Islam in a single short volume. As many other such works have been written either by apologists or by those hostile to Islam, Armstrong’s comprehensive and sympathetic work is welcome.” —Los Angeles Times

“In Armstrong’s brisk narrative, the clichés evaporate fast. . . . A book like this is suddenly essential." —Entertainment Weekly