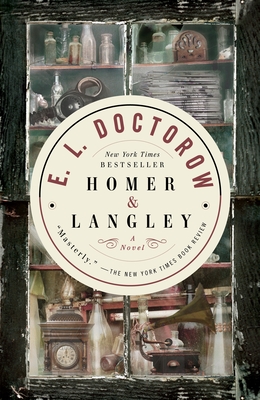 
Not On Our Shelves—Ships in 1-5 Days
NAMED ONE OF THE BEST BOOKS OF THE YEAR BY THE SAN FRANCISCO CHRONICLE, THE CHICAGO TRIBUNE, THE ST. LOUIS POST-DISPATCH, THE KANSAS CITY STAR, AND BOOKLIST

Homer and Langley Collyer are brothers—the one blind and deeply intuitive, the other damaged into madness, or perhaps greatness, by mustard gas in the Great War. They live as recluses in their once grand Fifth Avenue mansion, scavenging the city streets for things they think they can use, hoarding the daily newspapers as research for Langley’s proposed dateless newspaper whose reportage will be as prophecy. Yet the epic events of the century play out in the lives of the two brothers—wars, political movements, technological advances—and even though they want nothing more than to shut out the world, history seems to pass through their cluttered house in the persons of immigrants, prostitutes, society women, government agents, gangsters, jazz musicians . . . and their housebound lives are fraught with odyssean peril as they struggle to survive and create meaning for themselves.
E. L. Doctorow’s works of fiction include Welcome to Hard Times, The Book of Daniel, Ragtime, Loon Lake, World’s Fair, Billy Bathgate, The Waterworks, City of God, The March, Homer & Langley, and Andrew’s Brain. Among his honors are the National Book Award, three National Book Critics Circle awards, two PEN/Faulkner awards, and the presidentially conferred National Humanities Medal. In 2009 he was shortlisted for the Man Booker International Prize, honoring a writer’s lifetime achievement in fiction, and in 2012 he won the PEN/ Saul Bellow Award for Achievement in American Fiction, given to an author whose “scale of achievement over a sustained career places him in the highest rank of American literature.” In 2013 the American Academy of Arts and Letters awarded him the Gold Medal for Fiction. In 2014 he was honored with the Library of Congress Prize for American Fiction.
“Beautiful and haunting . . . one of literature’s most unlikely picaresques, a road novel in which the rogue heroes can’t seem to leave home.”—The Boston Globe

“Doctorow paints on a sweeping historical canvas, imagining the Collyer brothers as witness to the aspirations and transgressions of 20th century America; yet this book’s most powerfully moving moments are the quiet ones, when the brothers relish a breath of cool morning air, and each other’s tragically exclusive company.”— O: The Oprah Magazine

“A stately, beautiful performance with great resonance . . . What makes this novel so striking is that it joins both blindness and insight, the sensual world and the world of the mind, to tell a story about the unfolding of modern American life that we have never heard in exactly this (austere and lovely) way before.”—San Francisco Chronicle

“Cunningly panoramic . . . Doctorow has packed this tale with episodes of existential wonder that cpature the brothers in all their fascinating wackiness.”—Elle

“Following the panoramic scope of The March, Doctorow creates a microcosmic and mythic tale of compulsion, alienation, and dark metamorphosis inspired by the famously eccentric Collyer brothers of New York City. . . . Doctorow has Homer, who is blind, narrate with deadpan humor and spellbinding precision. . . . Over the decades, people come and go–lovers, a gangster, a jazz musician, a flock of hippies, but finally Homer and Langley are irrevocably alone, prisoners in their fortress of rubbish, trapped in their warped form of brotherly love. Wizardly Doctorow presents an ingenious, haunting odyssey that unfolds within a labyrinth built out of the detritus of war and excess.”–Booklist (starred review)

“A sweeping masterpiece about the infamous New York hermits, the Collyer brothers. . . . Occasionally, outsiders wander through the house, exposing it as a living museum of artifacts, Americana, obscurity and simmering madness. Doctorow’s achievement is in not undermining the dignity of two brothers who share a lush landscape built on imagination and incapacities. It’s a feat of distillation, vision and sympathy.”—Publishers Weekly (starred review)

“Doctorow works his usual magic in bringing history to life and larding it with disturbing implications. . . . As with much of Doctorow’s masterful fiction, Homer & Langley turns the American dream on its ear, offering us a glimpse of the dark side of our national—and personal—eccentricities.”—BookPage