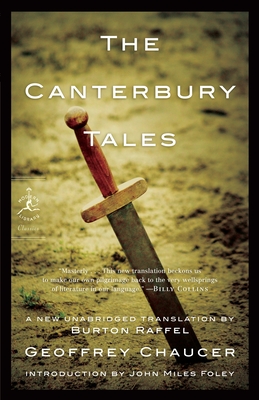 
Special Order—Subject to Availability
Beyond its importance as a literary work of unvarnished genius, Geoffrey Chaucer’s unfinished epic poem is also one of the most beloved works in the English language–and for good reason: It is lively, absorbing, perceptive, and outrageously funny. But despite the brilliance of Chaucer’s work, the continual evolution of our language has rendered his words unfamiliar to many of us. Esteemed poet, translator, and scholar Burton Raffel’s magnificent new unabridged translation brings Chaucer’s poetry back to life, ensuring that none of the original’s wit, wisdom, or humanity is lost to the modern reader. This Modern Library edition also features an Introduction by the widely influential medievalist and author John Miles Foley that discusses Chaucer’s work as well as his life and times.
Geoffrey Chaucer was born in London about 1340, the son of a well-to-do and well-connected wine merchant. In 1360, after his capture while fighting in the French wars, Edward III paid his ransom, and later Chaucer married Philippa de Roet, a maid of honor to the queen and sister-in-law to John of Gaunt, Chaucer's patron.

Chaucer's oeuvre is commonly divided into three periods: the French (to 1372), consisting of such works as a translation of the Roman de la Rose and The Book of the Duchess; the Italian (1372-1385), including The House of Fame, The Parliament of Fowls and Troilus and Criseyde; and the English (1385-1400), culminating in The Canterbury Tales. In 1400, he died, leaving 24 of the apparently 120 tales he had planned for his final masterpiece. Chaucer became the first of England's great men to be buried in the Poet's Corner of Westminster Abbey.

Peter G. Beidler is the Lucy G. Moses Distinguished Professor of English at Lehigh University. He is the author of a dozen books and more than 150 articles. In the summer of 2005 he directed a seminar for high school teachers on Chaucer's Canterbury Comedies (the seminar was supported by the National Endowment for the Humanities). He and his wife Anne have four children.
“A delight . . . [Raffel’s translation] provides more opportunities to savor the counterpoint of Chaucer’s earthy humor against passages of piercingly beautiful lyric poetry.”—Kirkus Reviews

“Masterly . . . This new translation beckons us to make our own pilgrimage back to the very wellsprings of literature in our language.” —Billy Collins

“The Canterbury Tales has remained popular for seven centuries. It is the most approachable masterpiece of the medieval world, and Mr. Raffel’s translation makes the stories even more inviting.”—Wall Street Journal