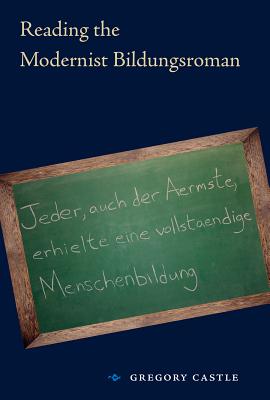 
Not On Our Shelves—Ships in 1-5 Days
The Bildungsroman is a genre novel whose territory is well traveled, that of a young and often alienated hero on the cusp of maturity, intent on discovering who he or she is and being true to that identity. The German word Bildung refers to forming and shaping, and the first Bildungsromane in 18th-century Germany focused on the hero's self-formation. Modernists such as Thomas Hardy, D. H. Lawrence, James Joyce, Oscar Wilde, and Virginia Woolf adopted and reinvigorated the Bildungsroman form as a means of telling stories about longing and transition. With this first major study of the historical context of the English and Irish Bildungsroman, Gregory Castle revisits the genre with a special interest in self-development and identity, as well as the viability of the classical concept of Bildung in the modernist era.
Drawing on German philosopher Theodor Adorno's theory of negative dialectics (which values the negative moment as a potentially critical force), Castle demonstrates the ongoing relevance of the Bildungsroman form and its powerful capacity for social and cultural critique. Its vitality is due in large measure to its ability to represent, in a self-consciously critical fashion, the complex and contradictory modes of self-development that have arisen in late modernity. The author contends that modernism managed to rehabilitate one of the most conventional genres in the history of literature. Examining such works as D. H. Lawrence's Sons and Lovers and James Joyce's APortrait of the Artist as a Young Man, Castle provides a significant scholarly contribution to literary criticism that will be of interest to students and scholars of modernism, the modernist novel, and Irish studies, as well as the problem of education and class in English and Irish literature.

Gregory Castle is associate professor of English at Arizona State University. He is the author of Modernism and the Celtic Revival (2001) and the editor of Postcolonial Discourses: An Anthology (2001).