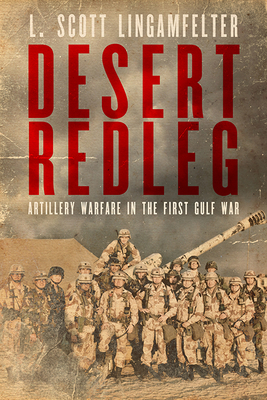 When Saddam Hussein's Iraq invaded Kuwait in August 1990, triggering the First Gulf War, a coalition of thirty-five countries led by the United States responded with Operation Desert Storm, which culminated in a one-hundred-hour coordinated air strike and ground assault that repelled Iraqi forces from Kuwait. Though largely forgotten in descriptions of the war, an eight-day barrage of artillery fire made this seemingly rapid offensive possible. At the forefront of this offensive were the brave field artillerymen known as "redlegs."

In Desert Redleg: Artillery Warfare in the First Gulf War, a veteran and former redleg of the 1st Infantry Division Artillery (otherwise known as the "Big Red One"), Col. L. Scott Lingamfelter, recounts the logistical and strategic decisions that led to a coalition victory. Drawing on original battle maps, official reports, and personal journals, Lingamfelter describes the experience of the First Gulf War through a soldier's eyes and attempts to answer the question of whether the United States "got the job done" in its first sustained Middle Eastern conflict. Part military history, part personal memoir, this book provides a boots-on-the-ground perspective on the largest US artillery bombardment since World War II.

Col. L. Scott Lingamfelter, USA (Ret.), began his twenty-eight-year military career as a field artilleryman where he progressed in rank to colonel. He served in the Virginia House of Delegates from 2002 to 2018. His commentaries have been published in the Richmond Times-Dispatch and the Washington Times. Check out his website https: //copybookwarrior.com/.