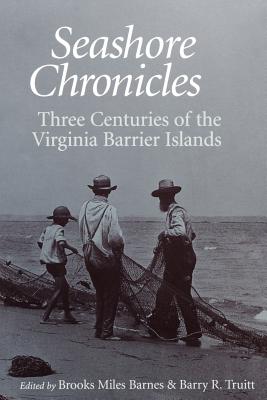 ASSATEAGUE, Chincoteague, Parramore, Smith's, Hog, Wallop's: The names of Virginia's isolated barrier islands evoke their beauty and wildness, their dynamic ecology. Drawing chapters from the writings of novelists, naturalists, journalists, and outdoorsmen, Seashore Chronicles presents the history of these slender, constantly shifting landforms from the 1650s to the present. Robert E. Lee surveys the agricultural potential of Smith's Island, and a young Howard Pyle describes the Chincoteague pony penning. William Warner provides an impressionistic foreword and noted writer Tom Horton adds a contemporary chapter on the islands' survival. Eastern Shore residents Brooks Miles Barnes and Barry R. Truitt have compiled a cyclical story of economic settlement, of destruction and conservation, for those who have visited the islands many times as well as for those who have not yet experienced their alluring vitality.