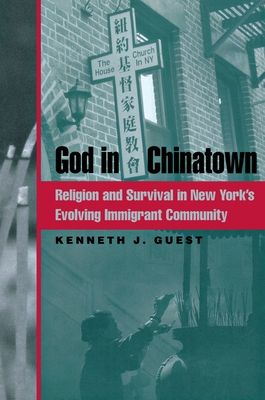 God in Chinatown is a path breaking study of the largest contemporary wave of new immigrants to Chinatown. Since the 1980s, tens of thousands of mostly rural Chinese have migrated from Fuzhou, on China's southeastern coast, to New York's Chinatown. Like the Cantonese who comprised the previous wave of migrants, the Fuzhou have brought with them their religious beliefs, practices, and local deities. In recent years these immigrants have established numerous specifically Fuzhounese religious communities, ranging from Buddhist, Daoist, and Chinese popular religion to Protestant and Catholic Christianity.

This ethnographic study examines the central role of these religious communities in the immigrant incorporation process in Chinatown's highly stratified ethnic enclave, as well as the transnational networks established between religious communities in New York and China. The author's knowledge of Chinese coupled with his extensive fieldwork in both China and New York enable him to illuminate how these networks transmit religious and social dynamics to the United States, as well as how these new American institutions influence religious and social relations in the religious revival sweeping southeastern China. God in Chinatown is the first study to bring to light religion's significant role in the Fuzhounese immigrants' dramatic transformation of the face of New York's Chinatown.
Kenneth J. Guest is Assistant Professor in the Department of Sociology and Anthropology at Baruch College, CUNY, and Senior Research Consultant at the International Center for Migration, Ethnicity, and Citizenship.