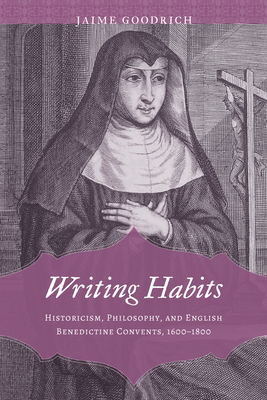 After Catholicism became illegal in England during the sixteenth century, Englishwomen established more than twenty convents on the Continent that attracted thousands of nuns and served as vital centers of Catholic piety until the French Revolution. Today more than 1,000 manuscripts and books produced by, and for, the Benedictine convents are extant in European archives. Writing Habits: Historicism, Philosophy, and English Benedictine Convents, 1600–1800 provides the first substantive analysis of these works in order to examine how members of one religious order used textual production to address a major dilemma experienced by every English convent on the Continent: How could English nuns cultivate a cloistered identity when the Protestant Reformation had swept away nearly all vestiges of English monasticism?

Drawing on an innovative blend of methodologies, Jaime Goodrich contends that the Benedictines instilled a collective sense of spirituality through writings that created multiple overlapping communities, ranging from the earthly society of the convent to the transhistorical network of the Catholic Church. Because God resides at the heart of these communities, Goodrich draws on the works of Martin Buber, a twentieth-century Jewish philosopher who theorized that human community forms a circle, with each member acting as a radius leading toward the common center of God. Buber’s thought, especially his conception of the I-You framework for personal and spiritual relationships, illuminates a fourfold set of affiliations central to Benedictine textual production: between the nuns themselves, between the individual nun and God, between the convent and God, and between the convent and the Catholic public sphere. By evoking these relationships, the major genres of convent writing—administrative texts, spiritual works, history and life writing, and controversial tracts—functioned as tools for creating community and approaching God.

Through this Buberian reading of the cloister, Writing Habits recovers the works of Benedictine nuns and establishes their broader relevance to literary history and critical theory.

Jaime Goodrich is professor of English at Wayne State University. She is author of Faithful Translators: Authorship, Gender, and Religion in Early Modern England and editor of Criticism: A Quarterly for Literature and the Arts.

“Goodrich presents by far the most cohesive account of the six English Benedictine convents that were founded in France and Flanders following the Dissolution, arguing that the need to create a new English monasticism offers a privileged space for us to investigate community formation. Her rigorous analysis of administrative, spiritual, polemical, and historical/life writing (grounded on over 1,000 surviving manuscripts and books) breaks new ground in the depth and breadth of its analysis and in its advancing of a feminist philosophical practice for early modern women’s writing.”
—Marie-Louise Coolahan, author of Women, Writing, and Language in Early Modern Ireland


“Writing Habits makes a compelling case that these recovered texts are not simply of documentary interest but indeed are voices we need to listen to, speaking eloquently across time about many of the current spiritual questions that continue to engage us today. Using ‘strategic presentism,’ Goodrich seeks to bridge the gap between a historicist focus on material textual production and a philosophical perspective in a work of importance to those studying early modern women writers, cultural historians, and modern theories of the nature of community.”
—Margaret J. M. Ezell, author of The Oxford English Literary History, vol. 5, 1645–1714: The Later Seventeenth Century


“Writing Habits offers a trifecta of timely and welcome scholarly interventions. Goodrich demonstrates with finesse and precision how the dialogic and communitarian ethics of Martin Buber refines the critical vocabularies associated with the ‘turn to religion’ in early modern literary studies, even as it also enlarges the methodological equipment associated with feminist philosophical investments in the field and archivally driven assessments of early modern women’s writing. These three lines of thought converge in Goodrich’s expert scrutiny of the rich archive of materials documenting the writing genres and tactics used by early modern exiled English Benedictine convent communities to maintain a sense of communitarian and religious integrity in the face of internal as well as external challenges. The resulting picture fulfills the book’s promise to disclose new perspectives on the supple cultural and religious grammar of early modern women’s writing as exhibited in the diasporic career of the English Benedictines. Beyond that, Writing Habits models how the act of ‘thinking with’ from a Buberian vantage point opens unimagined vistas on forgotten or neglected materials from the early modern period. The inroads gained here speak powerfully to contemporary feminist investments in cultivating a posture of attunement to theoretical perspectives and matters of moment that may be found germinating in the discursive texture of long-marginalized writings.”
—Lowell Gallagher, author of Sodomscapes: Hospitality in the Flesh