Keeping the Lights on at America’s Nuclear Power Plants (Paperback) 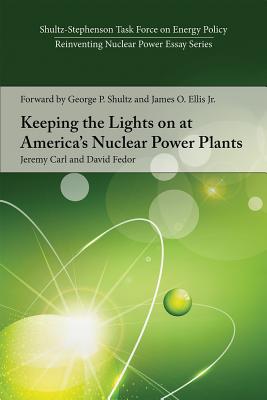 Keeping the Lights on at America’s Nuclear Power Plants (Paperback)


Special Order—Subject to Availability
In Keeping the Lights On at America's Nuclear Power Plants, Jeremy Carl and David Fedor discuss the decline of American nuclear power in light of major economic, technological and political challenges. They show how high costs, low public support, and popular clean energy trends threaten America's near- and long-term nuclear viability. American nuclear power plants are closing at a historically unprecedented pace, and there's little evidence of public or political will to stop the bleeding. Recognizing the nuclear industry's flaws, the authors argue that nuclear energy is widely misunderstood. They discuss the nuclear industry's failure to capture the public's attention and imagination, and survey the new national conversation about America's renewable energy future -- a conversation that does not include nuclear. For all these challenges, the authors argue that permanently opting out of the nuclear enterprise would be a mistake. Making the case for continued nuclear investment, they show how "keeping the lights on" at America's nuclear plants can bolster American technology leadership, security, and commitment to curbing carbon emissions. They offer a menu of policy options designed to spur meaningful action at state and federal levels, to change the industry's status quo, and to reintroduce nuclear to America's energy conversation.
Jeremy Carl is a research fellow at the Hoover Institution, where he focuses on energy policy and US politics. He has served as a policy advisor to many national political figures on a variety of issues ranging from energy to electoral strategy. David Fedor is a research analyst on the Hoover Institution's Shultz-Stephenson Task Force on Energy Policy. He has worked in energy and the environment across China, Japan, and the United States.

"Retaining America’s leading role in commercial nuclear energy is vital to our national security. Our leading position as a nuclear power generator allows us to also lead in shaping the non-proliferation order that protects our security. This book serves as a useful guide to various policy options facing today's civilian nuclear enterprise.” —John J. Hamre, President and CEO, the Center for Strategic and International Studies, former US Deputy Secretary of Defense

"Building on work at Stanford University, the authors discuss the immense benefits that the United States realizes from its current world leadership in nuclear energy and related technologies, and paint a grim picture of the impending loss of that position through failure to reform today’s electricity markets. A comprehensive set of reform options at the industry, state, and federal levels are presented.” —Peter B. Lyons, former US Assistant Secretary of Energy for Nuclear Energy and NRC Commissioner

"The whole monograph is worth reading . . . Keeping the Lights On should be on the reading list of any serious executive or legislative branch energy-issue policymaker, and the journalists who cover them.”  —Commentary Magazine

"An outstanding study on why nuclear electricity is important and how to keep it going in today’s crazy quilt of subsidies."  —Burton Richter, Stanford Professor and Director Emeritus, SLAC National Accelerator Laboratory, 1976 Nobel laureate in physics

"As Benjamin Franklin said: 'You may delay. Time will not.' During this unexpected period of energy abundance, it is important to carefully and collaboratively create a deliberate U.S. energy strategy and fully understand what role nuclear power could or should play in it. The character and tone of the discussion and debate must be worthy of the gravity of the issue. Jeremy Carl and David Fedor’s clear explanation of the value proposition of today’s nuclear plants—and ideas for how to address the challenges—is a remarkable and long-overdue guide towards that end."  —Admiral James O. Ellis Jr., USN (ret.), Hoover Institution Distinguished Fellow, former President and CEO, the Institute of Nuclear Power Operations