The Critical Mythology of Irony (Paperback) 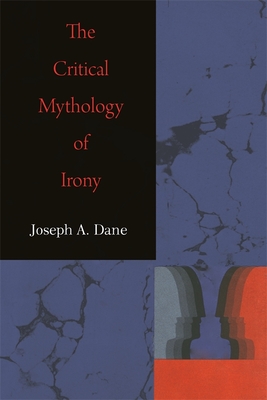 The Critical Mythology of Irony (Paperback)

By Joseph a. Dane

An ambitious theoretical work that ranges from the age of Socrates to the late twentieth century, this book traces the development of the concepts of irony within the history of Western literary criticism. Its purpose is not to promote a universal definition of irony, whether traditional or revisionist, but to examine how such definitions were created in critical history and what their use and invocation imply.

Joseph A. Dane argues that the diverse, supposed forms of irony--Socratic, rhetorical, romantic, dramatic, to name a few--are not so much literary elements embedded in texts, awaiting discovery by critics, as they are notions used by critics of different eras and persuasions to manipulate those texts in various, often self-serving ways. The history of irony, Dane suggests, runs parallel to the history of criticism, and the changing definitions of irony reflect the changing ways in which readers and critics have defined their own roles in relation to literature. Probing and provocative, The Critical Mythology of Irony will appeal to a broad spectrum of critics and scholars, particularly those concerned with the historical basis of critical language and its political and educational implications.
JOSEPH A. DANE is a professor of English at the University of Southern California. He is the author of many books, including most recentlyThe Long and the Short of It: A Practical Guide to European Versification Systems, and Out of Sorts: Typography and Print Culture.

“Dane provides the reader with a clear framework and a historical background against which an understanding of irony in all its shades and nuances begins to form.”—Modern Language Review

“Irony exists only in the eye of the ironologist, argues the author of this sweeping, deconstructive survey. . . . Dane is certainly right that the strategies for identifying and dealing with ‘what cannot be taken at face value’ have varied from age to age and school to school.” —Virginia Quarterly Review