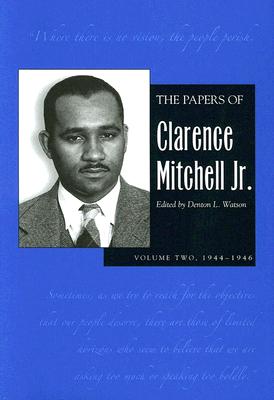 This is book number 2 in the The Papers of Clarence Mitchell Jr. series.

Clarence Mitchell Jr. was the driving force in the movement for passage of civil rights laws in America. The foundation for Mitchell’s struggle was laid during his tenure at the Fair Employment Practice Committee, where he led implementation of President Roosevelt’s policy barring racial discrimination in employment in the national defense and war industry programs. Mitchell’s FEPC reports and memoranda chart the beginning of the modern civil rights movement.

The first two volumes of a projected five-volume documentary edition of The Papers of Clarence Mitchell Jr. illuminate the FEPC’s work as a federal affirmative-action agency and the government’s struggle to enforce the nation’s antidiscrimination policy in industry, federal agencies, and labor unions.

Subsequent volumes will trace Mitchell’s successive enlistment of seven presidents in establishing and enforcing a permanent national nondiscrimination policy. Through his efforts, Congress passed the 1957, 1960, and 1964 Civil Rights Acts prohibiting discrimination in public accommodations, federal spending, and employment based on race, color, sex, and national origin; the 1965 Voting Rights Act; and the 1968 Fair Housing Act.

Clarence Mitchell Jr. (1911–84) was a civil rights activist and, for nearly thirty years, a chief lobbyist for the National Association for the Advancement of Colored People (NAACP). Nicknamed the “101st Senator,” he was instrumental to the successful passage of the most consequential US civil rights legislative acts of the 1950s and 1960s.

Denton L. Watson, formerly director of public relations for the National Association for the Advancement of Colored People, is an associate professor at SUNY College at Old Westbury. He is author of Lion in the Lobby: Clarence Mitchell, Jr.’s Struggle for the Passage of Civil Rights Laws and editor of The Papers of Clarence Mitchell Jr.