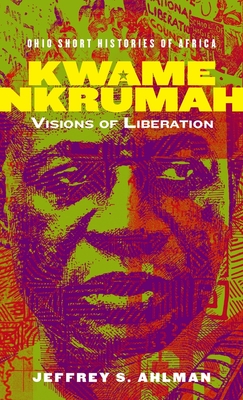 A new biography of Ghana’s Kwame Nkrumah, one of the most influential political figures in twentieth-century African history.

As the first prime minister and president of the West African state of Ghana, Kwame Nkrumah helped shape the global narrative of African decolonization. After leading Ghana to independence in 1957, Nkrumah articulated a political vision that aimed to free the country and the continent—politically, socially, economically, and culturally—from the vestiges of European colonial rule, laying the groundwork for a future in which Africans had a voice as equals on the international stage.

Nkrumah spent his childhood in the maturing Gold Coast colonial state. During the interwar and wartime periods he was studying in the United States. He emerged in the postwar era as one of the foremost activists behind the 1945 Manchester Pan-African Congress and the demand for an immediate end to colonial rule.

Jeffrey Ahlman’s biography plots Nkrumah’s life across several intersecting networks: colonial, postcolonial, diasporic, national, Cold War, and pan-African. In these contexts, Ahlman portrays Nkrumah not only as an influential political leader and thinker but also as a charismatic, dynamic, and complicated individual seeking to make sense of a world in transition.

Jeffrey S. Ahlman is an associate professor of history and director of African studies at Smith College. He is the author of Living with Nkrumahism: Nation, State, and Pan-Africanism in Ghana (Ohio University Press, 2017) and coeditor of the journal Ghana Studies.

“This short biography of Kwame Nkrumah highlights the multiple worlds that informed the Ghanaian leader’s entry onto the global stage. Ahlman offers an accessible and nuanced narrative about the personal, ideological, and intellectual cornerstones of Nkrumah’s vision for Ghana and the African continent, with perceptive attention to Nkrumah’s afterlife in scholarly and popular understandings of his memory and legacy.”—Naaborko Sackeyfio-Lenoch, author of The Politics of Chieftaincy: Authority and Property in Colonial Ghana, 1920–1950

“An excellent assessment of Nkrumah and his historical life and political project.”—Journal of Modern African Studies

“Jeffrey S. Ahlman’s [book] describes Kwame Nkrumah as a man—and a mind—in motion. Placing Nkrumah’s evolution into the context of the political shifts and ideological debates of the twentieth century, Ahlman steadily fleshes out the question of who Nkrumah was and why his name continues to ring throughout the African continent and beyond. Along the way he traces Nkrumah’s influences across continents and oceans, capturing the glory and pathos of this most-storied icon.”—Abena Ampofoa Asare, associate professor, Africana studies, Stony Brook University

“Jeffrey Ahlman takes us through the diverse stages of Kwame Nkrumah’s life, navigating his personal experiences via the specific global contexts that marked each era. Turn-of-the-century colonial infiltration into the African continent; global depression and war; antiracism and anticolonial resistance in the United States and Britain; and postcolonial pan-Africanism form a concrete stage for the imagination of one man from Nkroful. This is at once the story of Nkrumah’s vision for Africa and for Ghana and of Ghana’s ever-evolving rendering of Nkrumah.”—Leslie James, senior lecturer in global history, Queen Mary University of London

“Even for the student of Ghanaian history and politics, Kwame Nkrumah is an enigmatic figure at once lionized as a hero of African liberation and pan-Africanism, and dismissed as an authoritarian strongman. Drawing on his extensive work on early postcolonial Ghana, Jeffrey Ahlman presents a fresh and compelling portrait of Nkrumah, highlighting his unlikely rise to political leadership, capturing the scale of his ambitions, and documenting the internal contradictions of his political project.”—Adom Getachew, author of Worldmaking after Empire: The Rise and Fall of Self-Determination