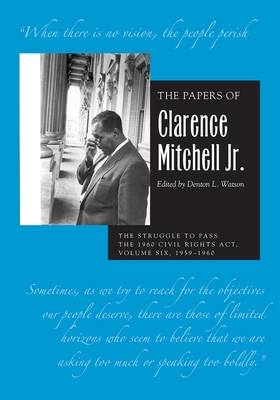 The Civil Rights Act of 1960 aimed to close loopholes in its 1957 predecessor that had allowed continued voter disenfranchisement for African Americans and for Mexicans in Texas.

In early 1959, the newly seated Eighty-Sixth Congress had four major civil rights bills under consideration. Eventually consolidated into the 1960 Civil Rights Act, their purpose was to correct the weaknesses in the 1957 law. Mitchell’s papers from 1959 to 1960 show the extent to which congressional resistance to the passage of meaningful civil rights laws contributed to the lunch counter sit-ins in Greensboro, North Carolina, and to subsequent demonstrations. The papers reveal how the repercussions of these events affected the NAACP’s work in Washington and how, despite their dislike of demonstrations, NAACP officials used them to intensify the civil rights struggle.

Among the act’s seven titles were provisions authorizing federal inspection of local voter registration rolls and penalties for anyone attempting to interfere with voters on the basis of race or color. The law extended the powers of the US Commission on Civil Rights and broadened the legal definition of the verb to vote to encompass all elements of the process: registering, casting a ballot, and properly counting that ballot. Ultimately, Mitchell considered the 1960 act unsuccessful because Congress had failed to include key amendments that would have further strengthened the 1957 act. In the House, representatives used parliamentary tactics to stall employment protections, school desegregation, poll-tax elimination, and other meaningful civil rights reforms. The fight would continue.

The Papers of Clarence Mitchell Jr. series is a detailed record of the NAACP leader’s success in bringing the legislative branch together with the judicial and executive branches to provide civil rights protections during the twentieth century.

Clarence Mitchell Jr. (1911–84) was a civil rights activist and, for nearly thirty years, a chief lobbyist for the National Association for the Advancement of Colored People (NAACP). Nicknamed the “101st Senator,” he was instrumental to the successful passage of the most consequential US civil rights legislative acts of the 1950s and 1960s.

Denton L. Watson, formerly director of public relations for the National Association for the Advancement of Colored People, is an associate professor at SUNY College at Old Westbury. He is author of Lion in the Lobby: Clarence Mitchell, Jr.’s Struggle for the Passage of Civil Rights Laws and editor of The Papers of Clarence Mitchell Jr.

“Clarence Mitchell, Jr., for decades waged in the halls of Congress a stubborn, resourceful and historic campaign for social justice. The integrity of this ‘101st senator’ earned him the respect of friends and adversaries alike. His brilliant advocacy helped translate into law the protests and aspirations of millions consigned for too long to second-class citizenship. The hard-won fruits of his labors have made America a better and stronger nation.”—citation for the Presidential Medal of Freedom, presented June 9, 1980, by President Jimmy Carter

“The Papers of Clarence Mitchell Jr. is a primary source and analytical goldmine for scholars of civil rights and labor struggles in the twentieth-century United States…. Well organized, engagingly written, and edited with cogent commentary, these two volumes (III & IV) take us inside Mitchell’s activist office and let us hear his own words.”—Journal of Southern History