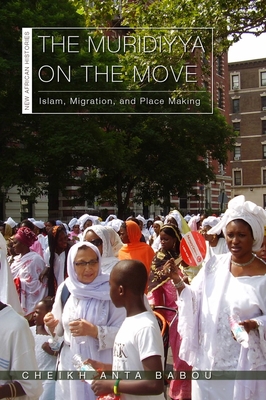 Highlights the role of transnational space making in the construction of diasporic Muridiyya identity.

The construction of collective identity among the Muridiyya abroad is a communal but contested endeavor. Differing conceptions of what should be the mission of Muridiyya institutions in the diaspora reveal disciples’ conflicting politics and challenge the notion of the order’s homogeneity. While some insist on the universal dimension of Ahmadu Bamba Mbakke’s calling and emphasize dawa (proselytizing), others prioritize preserving Muridiyya identity abroad by consolidating the linkages with the leadership in Senegal. Diasporic reimaginings of the Muridiyya abroad, in turn, inspire cultural reconfigurations at home.

Drawing from a wide array of oral and archival sources in multiple languages collected in five countries, The Muridiyya on the Move reconstructs over half a century of the order’s history, focusing on mobility and cultural transformations in urban settings. In this groundbreaking work, Babou highlights the importance of the dahira (urban prayer circle) as he charts the continuities and ruptures between Muridiyya migrations. Throughout, he delineates the economic, socio-political, and other forces that powered these population movements, including colonial rule, the economic crises of the postcolonial era, and natural disasters.

Cheikh Anta Babou is an associate professor of history at the University of Pennsylvania, where he has taught African history and the history of Islam in Africa since 2002. He is the foremost historian of the Muridiyya of Senegal and has published extensively on the genesis of the Murid order, the expansion of the Senegalese and Murid diaspora, and the politics of Sufi Islam in Senegal.

“Babou shows a true cultural and social anthropological intuition in describing the present making of the Muridiyya brotherhood throughout parts of Black Africa and of the Western world.”—Jean Copans, emeritus professor of sociology and anthropology, Université Paris Descartes

“Based on years of intense ethnographic and historiographic research on three continents, Cheikh Anta Babou chronicles the ways in which individual migrants built local communities closely tied to transnational networks radiating from the holy city of Tuuba. The Muridiyya on the Move explores the relationships between religious associations known as dahiras, entrepreneurial migrant disciples, and key personalities from the order in inscribing physical and social Murid spaces in each setting. Recounted in rich detail and often through the voices of the actors themselves, this fascinating work will be of great interest both to those familiar with the Muridiyya, and to those who are just discovering this dynamic Sufi community.”—Leonardo A. Villalón, author of Islamic Society and State Power in Senegal: Disciples and Citizens in Fatick

“Combining several historical, ethnographic, sociological, and theoretical perspectives, this book offers an exemplary social, economic, cultural, and intellectual history of a community that has been creatively adjusting to a constantly changing world. Babou engages with the question of how the Murid became subjects of globalization in their own terms and languages. Bold and innovative in his conception and execution of this book, Babou persuasively argues for the crucial role played by migration in reshaping the identity and global performance of the Murid community, culturally, politically, and religiously, at home and abroad. Diligent in uncovering sources and scrupulous in the use of primary materials, interlacing historical detail, personal interviews, and observations, Cheikh Babou brings together (un)familiar elements to account for the creative and vernacular-inspired self-inclusion to the temps du monde.”—Mamadou Diouf, editor of Tolerance, Democracy, and Sufis in Senegal

“Cheikh Babou combines scholarly rigor with an insider’s knowledge to produce a compelling account of the remarkable diaspora of Mourides from Senegal that combined individual initiative with collective solidarity to forge networks and communities in several African countries, France, Italy, and the United States. Attentive to religious and socioeconomic dimensions of migration, Babou brings out both the tensions and the creative adaptations as migrants became citizens in their new homes, worked out their relations with Muslim and non-Muslim fellow citizens, and brought up a new generation of Murids.”—Frederick Cooper, author of Africa since 1940: The Past of the Present

“This is a meticulously researched and well written history of the migrations that made the Muridiyya, the Sufi order created by the Shaykh Ahmadu Bamba, travel from Tuubaa, its holy center in Senegal, and spread throughout the world, becoming the global reality it is today. The book illuminates the crucial point that the nascent diaspora of the Muridiyya has meant the continuous reinvention, in new spaces, of the life and creative force of the order. Its migrant followers did not just turn their new location and experience into a shadow of the “real thing” back home: they made the diaspora another home where the Murid experience and the message of the founder produced renewed meanings, which then traveled back to the center. The Muridiyya on the Move is thus an eloquent and powerful demonstration that, yes, indeed, Islam is at home in the modern and the ‘Western’ world.”—Souleymane Bachir Diagne, coauthor of In Search of Africa(s): Universalism and Decolonial Thought