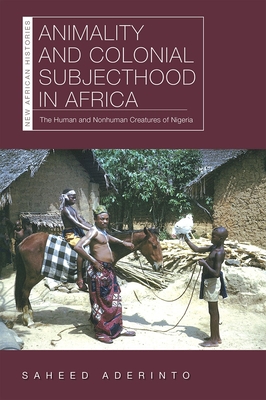 With this multispecies study of animals as instrumentalities of the colonial state in Nigeria, Saheed Aderinto argues that animals, like humans, were colonial subjects in Africa.

Animality and Colonial Subjecthood in Africa broadens the historiography of animal studies by putting a diverse array of species (dogs, horses, livestock, and wildlife) into a single analytical framework for understanding colonialism in Nigeria and Africa as a whole.

From his study of animals with unequal political, economic, social, and intellectual capabilities, Aderinto establishes that the core dichotomies of human colonial subjecthood—indispensable yet disposable, good and bad, violent but peaceful, saintly and lawless—were also embedded in the identities of Nigeria’s animal inhabitants. If class, religion, ethnicity, location, and attitude toward imperialism determined the pattern of relations between human Nigerians and the colonial government, then species, habitat, material value, threat, and biological and psychological characteristics (among other traits) shaped imperial perspectives on animal Nigerians.

Conceptually sophisticated and intellectually engaging, Aderinto’s thesis challenges readers to rethink what constitutes history and to recognize that human agency and narrative are not the only makers of the past.

Saheed Aderinto is a professor of history and African and African diaspora studies at Florida International University. He is the author of Guns and Society in Colonial Nigeria: Firearms, Culture, and Public Order and When Sex Threatened the State: Illicit Sexuality, Nationalism, and Politics in Colonial Nigeria, 1900–1958.

“By embracing nonhuman animals within the historical frame, Saheed Aderinto significantly expands our understanding of the African colonial encounter. With his fresh conceptual analysis, liberated from narrow disciplinary strictures, the author’s multifaceted research is a tour de force set to change the trajectory of African historiography.”—Jane Carruthers, author of National Park Science: A Century of Research in South Africa

“We have missed a major story of empire by failing to understand its operations at the level of species. Saheed Aderinto’s tremendous book challenges us to see Nigeria, colonial subjecthood, and all animals in integrative and provocative new ways."—Alan Mikhail, author of The Animal in Ottoman Egypt and God’s Shadow: Sultan Selim, His Ottoman Empire, and the Making of the Modern World

“This book is a wonderful addition to animal-sensitive histories of Africa, offering an important contribution toward rethinking coloniality and postcoloniality by adding the analytic lens of species to a palimpsest of gender, class, and race. Animality and Colonial Subjecthood in Africa reconsiders the history of relations not only between people and animals but also between various groups of people with animals as a fulcrum.”—Sandra Swart, author of Riding High: Horses, Humans, and History in South Africa