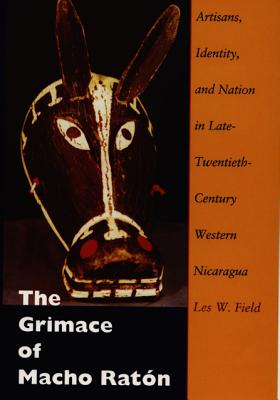 
Special Order—Subject to Availability
In this creative ethnography Les W. Field challenges a post-Sandinista national conception of identity, one that threatens to constrict the future of subaltern Nicaraguans. Drawing on the works and words of artisans and artisanas, Indians, and mestizos, Field critiques the national ideology of ethnic homogeneity and analyzes the new forms of social movement that have distinguished late-twentieth-century Nicaragua. As a framework for these analytic discussions, Field uses the colonial-era play El G eg ence o Macho Rat n and the literature relating to it.
Elite appropriations of El G eg ence construe it as an allegory of mestizo national identity in which mestizaje is defined as the production of a national majority of ethnically bounded non-Indians in active collaboration with the state. By contrast, Field interprets the play as a parable of cultural history and not a declaration of cultural identity, a scatological reflection on power and the state, and an evocation of collective loss and humor broadly associated with the national experience of disempowered social groups. By engaging with those most intimately involved in the performance of the play--and by including essays by some of these artisans--Field shows how El G eg ence tells a story about the passing of time, the absurdity of authority, and the contradictions of coping with inheritances of the past. Refusing essentialist notions of what it means to be Indian or artisan, Field explains the reemergence of politicized indigenous identity in western Nicaragua and relates this to the longer history of artisan political organization. Parting ways with many scholars who associate the notion of mestizaje with identity loss and hegemony, Field emphasizes its creative,
productive, and insightful meanings. With an emphasis on the particular struggles of women artisans, he explores the reasons why forms of collective identity have posed various kinds of predicaments for this marginalized class of western Nicaraguans.
This book will appeal to readers beyond the field of Latin American anthropology, including students and scholars of literature, intellectual history, women's studies, and the politics of ethnicity.

Les W. Field is Assistant Professor of Anthropology at the University of New Mexico.