The Rise and Fall of Khoqand, 1709-1876: Central Asia in the Global Age (Central Eurasia in Context) (Paperback) 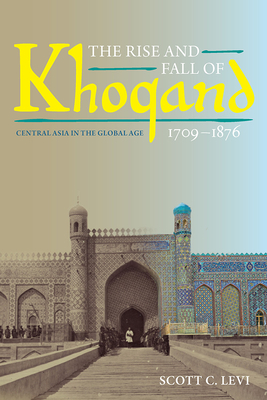 The Rise and Fall of Khoqand, 1709-1876: Central Asia in the Global Age (Central Eurasia in Context) (Paperback)


Not On Our Shelves—Ships in 1-5 Days
This book analyzes how Central Asians actively engaged with the rapidly globalizing world of the eighteenth and nineteenth centuries. In presenting the first English-language history of the Khanate of Khoqand (1709–1876), Scott C. Levi examines the rise of that extraordinarily dynamic state in the Ferghana Valley. Levi reveals the many ways in which the Khanate’s integration with globalizing forces shaped political, economic, demographic, and environmental developments in the region, and he illustrates how these same forces contributed to the downfall of Khoqand.
To demonstrate the major historical significance of this vibrant state and region, too often relegated to the periphery of early modern Eurasian history, Levi applies a “connected history” methodology showing in great detail how Central Asians actively influenced policies among their larger imperial neighbors—notably tsarist Russia and Qing China. This original study will appeal to a wide interdisciplinary audience, including scholars and students of Central Asian, Russian, Middle Eastern, Chinese, and world history, as well as the study of comparative empire and the history of globalization.
Scott C. Levi is associate professor of Central Asian history at The Ohio State University. He is a past president of the Central Eurasian Studies Society and author of several books, including The Indian Diaspora in Central Asia and its Trade, 1550–1900 and Caravans: Indian Merchants on the Silk Road, and coeditor of Islamic Central Asia: An Anthology of Historical Sources.
“Seldom have I read a history of modern Central Asia so beautifully written, clearly constructed, and deeply researched. Levi’s fine prose, wit, and erudition make this manuscript a readable, original, and endlessly interesting work. Levi’s book is a welcome addition to the increasingly rich historiography of Central Asia and it deserves the very highest praise.”
—Paolo Sartori, Institute of Iranian Studies, Vienna