For Strasbourg: Conversations of Friendship and Philosophy (Hardcover) 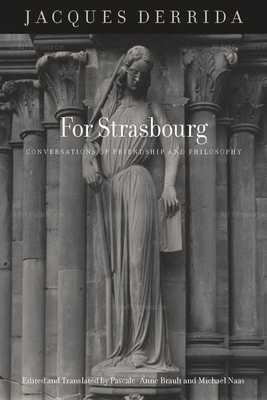 For Strasbourg: Conversations of Friendship and Philosophy (Hardcover)


Special Order—Subject to Availability
For Strasbourg consists of a series of essays and interviews by French philosopher and literary theorist Jacques Derrida (1930-2004) about the city of Strasbourg and the philosophical friendships he developed there over a forty year period. Written just months before his death, the opening essay of the collection, "The place name(s): Strasbourg," recounts in great detail, and in very moving terms, Derrida's deep attachment to this French city on the border between France and Germany. More than just a personal narrative, however, it is a profound interrogation of the relationship between philosophy and place, philosophy and language, and philosophy and friendship. As such, it raises a series of philosophical, political, and ethical questions that might all be placed under the aegis of what Derrida once called "philosophical nationalities and nationalism." The other three texts included here are long interviews/conversations between Derrida and his two principal interlocutors in
Strasbourg, Jean-Luc Nancy and Philippe Lacoue-Labarthe. These interviews are significant both for the themes they focus on (language, politics, friendship, death, life after death, and so on) and for what they reveal about Derrida's relationships to Nancy and Lacoue-Labarthe. Filled with sharp insights into one another's work and peppered with personal anecdotes and humor, they bear witness to the decades-long intellectual friendships of these three important contemporary thinkers. This collection thus stands as a reminder of and testimony to Derrida's relationship to Strasbourg and to the two thinkers most closely associated with that city.

The late Jacques Derrida was the single most influential voice in European philosophy of the last quarter of the twentieth century. His Athens, Still Remains, The Animal That Therefore I Am, Sovereignties in Question, and Deconstruction in a Nutshell have been published by Fordham University Press. Pascale-Anne Brault is Professor of French at DePaul University. She is the co-translator of several works of Jacques Derrida, including The Work of Mourning and Learning to Live Finally, and of Jean-Luc Nancy's Noli Me Tangere: On the Raising of the Body (Fordham). Michael Naas is Professor of Philosophy at DePaul University. His most recent books include Taking on the Tradition: Jacques Derrida and the Legacies of Deconstruction, Derrida from Now On, and Miracle and Machine: Jacques Derrida and the Two Sources of Religion, Science, and the Media (the last two Fordham).