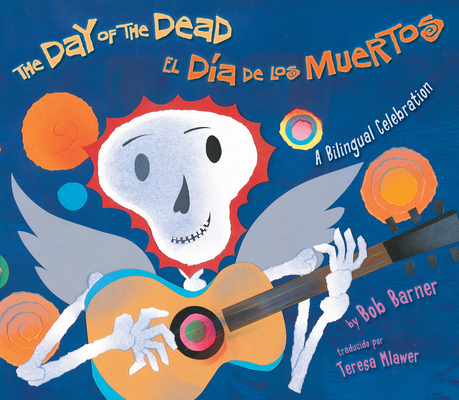 
On Our Shelves Now at:
Follow two children as they celebrate their ancestors in this bilingual introduction to el Día de los Muertos-- the Day of the Dead!

They prepare offerings of flowers, sugar skulls, and special bread, and make delicious foods to eat and share.  By spreading marigold petals, they guide the dead home to join the festivities. After hours of singing, dancing, and reminiscing, it's time for bed.

The festivities are described in brief, lyrical text, presented in both Spanish and English.  An author's note provides more detail on the holiday, its historical context, and the inspiration behind the artwork.

Bob Barner's signature collages incorporate the traditional Day of the Dead symbols and bright, bold colors to evoke the joyful atmosphere of this vibrant holiday.

Celebrate our ancestors on the Day of the Dead / Honremos a los antepasados en el Día de los Muertos!
Bob Barner is the author and illustrator of over 25 books for children, including Fish Wish and Bugs! Bugs! Bugs! An accomplished artist, he began his career as a cartoonist working on Li'l Abner under Al Capp before moving on to art direction and illustration. His clients include The Boston Globe, Scholastic, Chronicle, the New England Aquarium, Little, Brown, and many more. He lives in San Francisco, California.
"The festive colors and imagery in Barner's cut-paper collages encapsulate the celebratory and memorial nature of the holiday"—Publishers Weekly