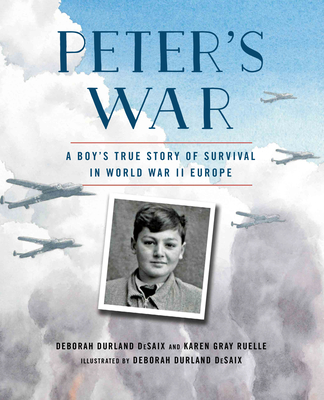 
In Stock—Click for Locations
The harrowing true story of a German-Jewish boy who had to survive World War II on his own, separated from his parents as they fled the Holocaust.

In 1942, as twelve-year-old Peter Feigl and his family tried to disappear in the Southern Zone of France, his parents were arrested.

They had been constantly on the run for years, as Hitler consolidated power and overran Europe. Peter and his family fled from Germany to Czechoslovakia, then Austria, Belgium, and finally France. They were desperate to stay one step ahead of the Nazis and their concentration camps.

But suddenly, Peter was alone: a spirited child coming of age in hiding during the worst war in modern history. This book follows his incredible journey for survival, and his efforts as a secret resistance fighter.

Beautifully illustrated in a scrapbook style, featuring original artwork alongside historical photographs from Peter's early life, this one-of-a-kind nonfiction picture book offers a very personal look into the lives of young people trying to evade-- and resist-- the Nazis. Excerpts and images from Peter's diary of those years add irreplaceable, first-hand details to the account of his survival.

The acclaimed nonfiction duo of Karen Gray Ruelle and Deborah Durland DeSaix, creators of Hidden on the Mountain and The Grand Mosque of Paris, have crafted an enthralling account, filled with meticulous research and informed by the authors' own interviews with Feigl. Accessible and detailed, this will inspire young readers and offer a new perspective on a frequently studied era of history.

Featuring more than ten pages of supplementary backmatter-- including an epilogue, extensive historical notes, a wealth of recommendations for further reading, and a comprehensive list of sources and credits-- Peter's War is a masterful resource, and an incredible, unforgettable true story.

A Bank Street Best Children's Book of the Year!
Karen Gray Ruelle is a former librarian turned full-time author and illustrator of children's books. Her books include the Harry and Emily easy readers, as well as picture books and nonfiction. Hidden on the Mountain, cowritten with Deborah Durland DeSaix, was a Sydney Taylor Notable Book and received a starred review from Kirkus Reviews. She lives in New York City.

Deborah Durland DeSaix is a former college professor who now devotes her time to painting, ceramics, and writing. Hidden on the Mountain, cowritten with Karen Gray Ruelle, was a Sydney Taylor Notable Book and received a starred review from Kirkus Reviews. She lives in Lisbon, Portugal.
★ "This affecting compilation will help young readers put a human face on an unfathomable tragedy, as Peter's personality shines through in his writing. This accessible tribute is an important addition to children's Holocaust literature."—Booklist, Starred Review

"This is a valuable addition to the shelves of Holocaust literature, highlighting both the single-minded determination of the Germans and the heroic efforts of one French community. . . . An important, well-written account of survival against overwhelming odds."—Kirkus Reviews


"this is an important primary source story of a young refugee during World War II." —School Library Journal


"In this beautifully designed book . . .  events come to life through period photographs juxtaposed with De Saix’s luminous watercolor illustrations to convey the emotions of persecuted Jews. . . . There’s a lot to absorb here, but the authors keep the text simple and clear"—ALJ News and Reviews