Freedom Summer: The 1964 Struggle for Civil Rights in Mississippi (Paperback) 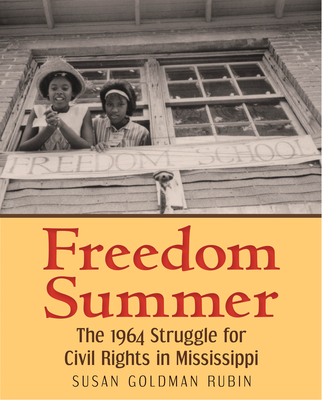 Freedom Summer: The 1964 Struggle for Civil Rights in Mississippi (Paperback)


In Stock—Click for Locations
In 1964, Mississippi civil rights groups banded together to fight Jim Crow laws in a state where only 6.4 percent of eligible black voters were registered.

Testing a bold new strategy, they recruited students from across the United States. That summer these young volunteers defied segregation by living with local black hosts, opening Freedom Schools to educate disenfranchised adults and their children, and canvassing door-to-door to register voters.

Everyone involved knew there would be risks but were nonetheless shocked when three civil rights workers disappeared and were soon presumed murdered. The organizers' worst fears were realized as volunteers, local activists, and hosts faced terror on a daily basis. Yet by the middle of August, incredible strides had been made in spite of the vicious intimidation. The summer unleashed an unstoppable wave of determination from black Mississippians to demand their rights and helped bring about a new political order in the American South.

Fifty years after this landmark civil rights project in Mississippi, an award-winning author offers a riveting account of events that stunned the nation. Includes over 75 photographs, drawings, original documents, a timeline, source notes, bibliography, maps, and an index.
Susan Goldman Rubin is the award-winning author of Fireflies in the Dark: The Story of Friedl Dicker-Brandeis and the Children of Terezin,which was a Sydney Taylor Award Honor Book, a SCBWI Golden Kite Honor Book, and a Booklist Top Ten Art Book for Youth. Her other books include a collaboration with Ela Weissberger, The Cat with the Yellow Star: Coming of Age in Terezin, and ALA Notable Children's Book. She lives in Malibu, California.
* "This meticulously researched, compellingly told account covers an incredible moment in history...This title is the epitome of excellent historical reporting with the human element never forgotten." —School Library Journal, Starred Review