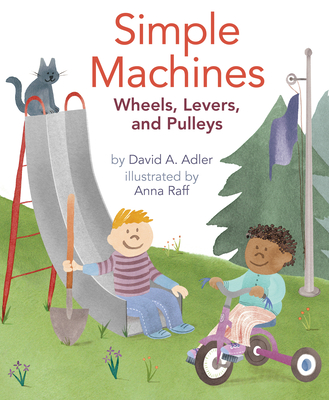 
Not On Our Shelves—Ships in 1-5 Days
How many simple machines do you use every day? Probably more than you realize!

Machines make work easier— helping break things apart, lift heavy objects, and change the power and direction of force applied to them. In this accessible picture book, celebrated nonfiction author David A. Adler outlines different types of simple machines—wedges, wheels, levers, pulleys, and more—and gives common examples of how we use them every day.

Anna Raff's bright illustrations show how simple machines work—and add a dose of fun and humor, too. Two appealing kids and their comical cat use machines to ride see-saws, turn knobs, and even eat apples.

Perfect for classrooms or for budding engineers to read on their own, Simple Machines uses clear, simple language to introduce important mechanical vocabulary, and easy-to-understand examples to illustrate how we use machines to solve all kinds of problems.

Don't miss David A. Adler and Anna Raff's other science collaborations—including Light Waves; Magnets Push, Magnets Pull; and Things That Float and Things That Don't.
David A. Adler is a former math teacher and author of more than two hundred books for children.  He has collaborated on several science picture books with Anna Raff, including Things That Float and Things That Don't and Light Waves, a finalist for the SB&F Prize for Excellence in Science Books.  He is also the author of the Picture Book Biography series, the Cam Jansen mystery series, as well as books on math and history. He lives in New York.

Anna Raff is an award-winning illustrator of children's books. She illustrated David A. Adler's Simple Machines and Things That Float and Things That Don't, which received starred reviews from both Booklist and Publishers Weekly. She lives in New York City.
"gives accessible examples of the simple machines of the title . . . Pastel illustrations are lively and friendly, with just enough detail."—The Horn Book

"as solid a look at simple machines as any that exists outside of dry textbooks."—Kirkus Reviews