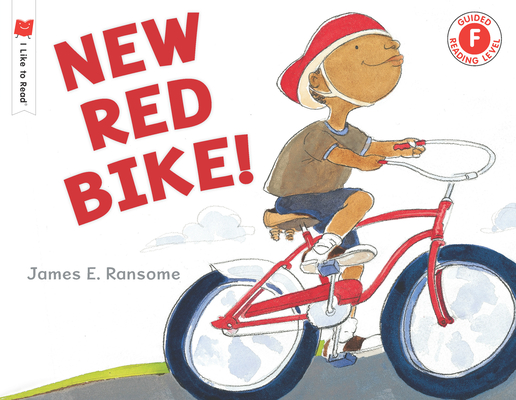 
Backordered
What to do when you get a shiny new red bike? Go for a ride!

Up and down! Round and round! Tom is having a blast zooming all over the neighborhood on his new red bike. But when Tom stops by Sam's house to show off his wheels, he's in for an unhappy surprise. The new bike is sudenly...gone. Could his best friend, Sam, be the culprit? This deceptivly simple-seeming picture book offers a clever take on sharing.

The award-winning I Like to Read® series focuses on guided reading levels A through G, based upon Fountas and Pinnell standards. Acclaimed author-illustrators--including winners of the Caldecott, Theodor Seuss Geisel, and Coretta Scott King honors--create original, high quality illustrations that support comprehension of simple text and are fun for kids to read with parents, teachers, or on their own!

Level F books, for early first graders, feature longer, more varied sentences than Level E. Level F books encourange kids to decode new multi-syllable words in addition to recognizing sight words. Stories are more complex, and illustrations provide support and additional detail. When Level F is mastered, follow up with Level G.
James E. Ransome's numerous accolades include a Coretta Scott King Medal (which he won for The Creation), two Coretta Scott King Honors, one of which was awarded for Before She Was Harriet, and an NAACP Image Award. He lives in upstate New York with his wife and collaborator, writer Lesa Cline-Ransome.
"Told in only a few words, this likable story of multicultural friends will tap into children’s emotions as they identify with Tom’s excitement over owning something new and his dismay when it is taken away. Ransome’s watercolor and pencil artwork is surrounded by plenty of white space and extends the story. A few black line accents trace the bike’s path, and Tom’s facial expressions convey his changing mood. A fine choice for storytimes, this picture book would be a good discussion starter on the topics of friendship and sharing."—School Library Journal