Between the Water and the Woods (Hardcover) 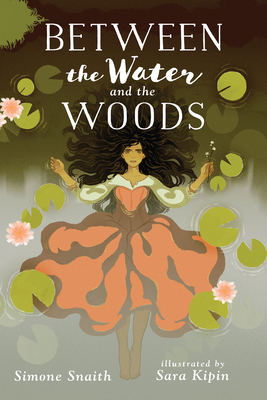 Between the Water and the Woods (Hardcover)

An illustrated fantasy filled with beauty and power, Between the Water and the Woods sweeps you into a world where forests are hungry; knights fight with whips; the king is dying; and a peasant girl's magic will decide the future of the realm . . .

When Emeline's little brother breaks all three of their village's rules, she is forced to use her family's forbidden magic to rescue him from the dark things he awakens, the Ithin. Now that the Ithin are afoot in the land, she must, by law, travel to the royal court and warn the king. But the only way she and her family can make the journey to the capital is with the protection of a sour magister and a handsome, whip-wielding Lash Knight. Will Emeline survive in a city where conspiracies swirl like smoke and her magic is all but outlawed?

Seven full-page black-and-white illustrations accompany Between the Water and the Woods, a lush, fairy-tale-style fantasy perfect for readers of Karen Cushman and Shannon Hale.
Simone Snaith is originally from Louisiana but now lives in L.A., where she sings in the New Wave band Turning Violet and works as a freelance journalist. She loves sci-fi, fantasy, music, deep forests, and all things '80s. Follow her @schimonie.

Sara Kipin is a graduate of the Maryland Institute College of Art's illustration program and works as a color stylist at Warner Bros. Animation. She has also worked at Marvel Animation and Nickelodeon, and illustrated Leigh Bardugo's New York Times bestselling book The Language of Thorns: Midnight Tales and Dangerous Magic. Sara lives in Burbank, California. Follow her @sarakipin.
"A delightfully fresh fantasy that mixes science and magic in fascinatingly complex ways." —School Library Journal

"Political intrigue, magic, knights, dark creatures, a small love story, and an intense battle with Ithin and automatons keep the pages turning. Emeline’s strong voice guides her audience through this fantasy adventure, and readers will be eagerly waiting to see what else will happen to Emeline and her family." —School Library Connection

"A fun story of magic, family, and love, and my kids were clamoring for me to read it each night . . . I was delighted to see the political tensions play out in interesting fashion."—Carrie Callaghan, author of A Light of Her Own and Salt the Snow

"A twisting plot to go with her exquisite characters and understandable humor . . . 4 or 5 stars."—Knox County Public Library

"A beautifully written story that feels more like an ageless fable than a contemporary novel."—Online Eccentric Librarian

"A beautiful story about love family and nature . . . recommended for its lush descriptions and wonderful storytelling."—Milky Way of Books

"Reminiscent of an old fairytale . . . the relationship between Emeline and her brother is one of the most realistic I’ve seen in a fantasy setting . . . I thoroughly enjoyed this book."—The Omnibus

"It's very reminiscent of the fantasy books I read growing up. It has a bit of a timeless feel . . . The trope of magic vs technology/science plays out nicely . . . a delightful read"—Alison in Bookland