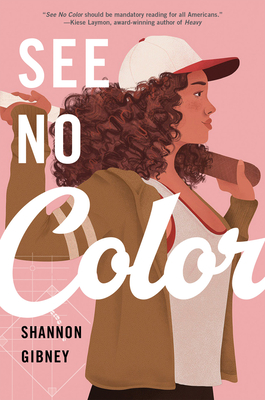 
Not On Our Shelves—Ships in 1-5 Days
Black daughter, white father, white mother. Race, adoption, and identity collide in this award-winning debut about a teen challenging the life she's always known.

Being a transracial adoptee doesn't bother sixteen-year-old Alex Kirtridge-at least, not in a way she can explain to her white family. It doesn't matter that she's biracial when she's the star of the baseball team. But when Alex is off the field, she's teased for "acting" too white and judged for looking black. And while she loves her parents, her hot-headed brother, and her free-speaking sister, they don't seem to understand what it means that Reggie, a fellow ball player, is the first black guy who's wanted to get to know her.

Things only get more complicated when she finds hidden letters from her birth father. Alex can't stop asking questions. Does she really fit in with her family? What would it be like to go to a black hairdresser? Should she contact her birth father, despite the fact that it might devastate her parents? Meanwhile, her body is changing, and Alex isn't sure she can keep up with her teammates. If she's going to find answers, Alex must come to terms with her adoption, her race, and the dreams she thought would always guide her.

Author Shannon Gibney draws from her own experiences as a transracial adoptee to deliver this honest coming-of-age novel about a girl who doesn't know where she wants to fit in. Paperback edition includes a reading guide at the back!
Shannon Gibney is a writer, professor, and activist. Her debut novel See No Color, which draws on her experience of being adopted into a white family as a child, received a Minnesota Book Award and two starred reviews. She is also the author of Dream Country, which received five starred reviews and a Minnesota Book Award. Her critical and creative writing regularly appear in a variety of publications. She lives in Minneapolis with her children. Visit her online at shannongibney.com
★ "Transracial adoption is never oversimplified, airbrushed, or sentimentalized, but instead, it's portrayed with bracing honesty as the messy institution it is: rearranging families, blending cultural and biological DNA, loss and joy. An exceptionally accomplished debut."—Kirkus Reviews, Starred Review

★ "Debut novelist Gibney offers an unflinching look at the complexities of racial identity in the story of a black teenager trying to understand her place in the white family who adopted her. . . . While not all of Alex's questions are answered by book's end, readers will finish this engaging, layered novel confident that she's ready to face whatever comes next, and with plenty to think about themselves."—Publishers Weekly, Starred Review

"This thoughtful novel adds a much-needed perspective on a subject that affects many families but is rarely covered in YA fiction." —School Library Journal