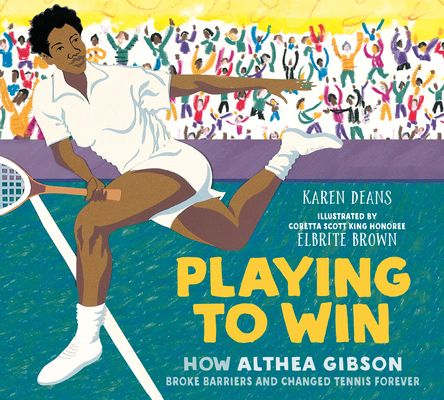 
On Our Shelves Now at:
A new and updated edition of the picture book about the woman called "The Jackie Robinson of tennis."

Although stars like Serena Williams cite Althea Gibson as an inspiration, Gibson's story is not well-known to many young people today. Growing up tough and rebellious in Harlem, Althea took that fighting attitude and used it to go after her goals of being a tennis champion, and a time when tennis was a game played mostly by wealthy white people in country clubs that excluded African Americans.

In 1956, she became the first Black American to win a major championship when she won at The French Open. When she won the celebrated Wimbledon tournament the following year, Gibson shook hands with the Queen of England. Not bad for a kid from the streets of Harlem.

With determination and undeniable skill, Althea Gibson become a barrier-breaking, record-setting, and world-famous sportswoman. This new and updated edition of this inspirational biography contains recent information on the impact of Gibson's legacy.
Karen Deans has worked as a journalist and is also a muralist, illustrator, writer, and entrepreneur. She lives in the Washington, D.C. area with her husband and three children. Surprised when she was unable to find biographies of many of the women she admired to share with her daughter, she decided to write her own. Her other books include Swing Sisters: The Story of the International Sweethearts of Rhythm.

Elbrite Brown is an illustrator, artist, and high school art teacher. His illustrations for My Family Plays Music by Judy Cox won him a Coretta Scott King / John Septoe Award for New Talent. More than anything else, Elbrite looks at art as a way for him to inspire others. While doing research on Althea Gibson, he went to tennis matches and studied photographs and videos of the great star in action. He came to feel that Althea Gibson was as graceful as a ballerina and tried to capture just the right sense of movement in this book.
★ "Deans skillfully shows the depth of Gibson’s journey by including moments of discouragement and loss, and by emphasizing the importance of the support and encouragement from friends. The historical context of racism is handled well, and the clear text is concise. Brown’s illustrations sing with dynamic colors. . . . A beautiful and thorough addition to every biography section." —School Library Journal, Starred Review