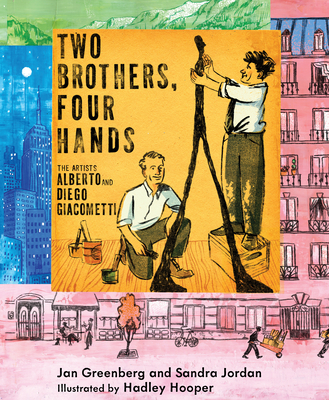 
On Our Shelves Now at:
The inspiring true story of the Giacometti brothers, one an artist, the other a daredevil, both devoted to their craft . . . but even more devoted to each other. Now in paperback.

Everyone who knew them agreed. Alberto was the genius of the family. His younger brother Diego was his opposite--he didn't care much for books or schoolwork, and he had no idea what he would be when he grew up. But despite their differences, the two brothers shared an intense bond.

Alberto Giacometti became one of the iconic artists of the twentieth century, whose tall, spindly sculptures grace the collections of museums around the world. Diego was always at his side, helping and encouraging, and in his spare time creating remarkable pieces of furniture, works of sculpture in their own right.

The poignant story of brothers and sculptors Alberto and Diego Giacometti is skillfully brought to life in the hands of multiple Sibert Honor authors Jan Greenberg and Sandra Jordan, and the spectacular artwork of Hadley Hooper.

This lavishly illustrated 64-page book includes extensive backmatter, complete with a timeline, source notes, photographs, and an essay on how to look at a Giacometti sculpture.

Hadley Hooper is a fine artist whose illustration work includes art for the Coretta Scott King winning memoir How I Discovered Poetry by Marilyn Nelson. She received considerable attention for her illustrations for Patricia MacLachlan's The Iridescence of Birds. She lives in Denver, Colorado.
★ "Hooper’s evocative mixed-media illustrations capture the period in stunning detail. Featuring a strong black line, they bring figures into the foreground in scenes awash in pink, blue, green, or gold. . . . Don’t miss this moving, brilliantly illustrated picture book portrait of brothers in art."—School Library Journal, Starred Review

★ "Hooper’s loosely drawn and colored illustrations are a fine accompaniment to the less structured forms of both Giacomettis. Observant readers will notice how the shadow of the brothers arm-in-arm pays tribute to Alberto’s style. Concluding thumbnails of the brothers’ art, an analysis of Alberto’s Walking Man, and other important back matter add further insight. A moving introduction to this creative and symbiotic pair."—Booklist, Starred Review

★ "Illustrations by Hooper (Mabel and Sam at Home) exude warmth in expressive black contours, and large planes of colored wash—the blue of Paris at night, the red of war—provide the spreads with moody overtones. Diego and his devotion to his brother emerge as the story’s most appealing elements in this fascinating retrospective."—Publishers Weekly, Starred Review

"Short sentences impel the narrative forward with poetic pulse and economy, and the careful balance of the Giacomettis’ art and domestic worlds extends the title’s interest. The vibrant colors of Hooper’s mixed-media illustrations are, though appealing, nearly extraneous in light of the commanding black line work that harmonizes with Alberto’s and Diego’s slender metal creations." —The Bulletin of the Center for Children's Books