The Ups and Downs of Gravity (Paperback) 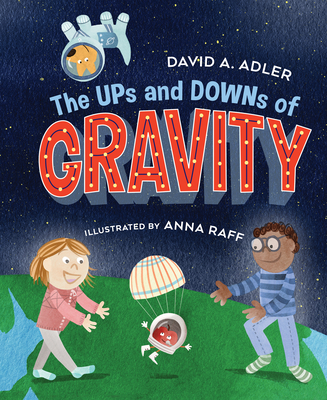 The Ups and Downs of Gravity (Paperback)


In Stock—Click for Locations
Explore the ups and downs of gravity in this introduction to physical science by a trusted nonfiction team.

What happens to a ball when it rolls off a table? It falls to the floor. Why doesn't the ball keep rolling straight ahead or fly up off the table? The answer is gravity.

From density to inertia to free fall, David A. Adler skillfully explains how this invisible, but all too real force operates and what it means for our daily lives. Notable science experiments by Sir Isaac Newton and astronaut David R. Scott are covered. Also included are activities for kids to test at home and in the classroom. Anna Raff's bright and humorous artwork helps breakdown the concepts in a kid-friendly way. Vetted by a physicist, this fact-filled primer includes a glossary.
David A. Adler is a former math teacher and author of more than two hundred books for children. He has collaborated on several science picture books with Anna Raff, including Light Waves and Magnets Push, Magnets Pull, both named finalists for the AAAS/Subaru SB&F Prize for Excellence in Science Books. He is also the author of the Picture Book Biography series and the Cam Jansen mystery series. He lives in New York.

Anna Raff is an acclaimed illustrator of children's books. She illustrated David A. Adler's Simple Machines and Things That Float and Things That Don't, which received starred reviews from both Booklist and Publishers Weekly. She lives in New York City.
★  "Gravity is clearly and simply explained in this book featuring both animals—mice, dogs—and humans, who are diversely represented. . . . An excellent nonfiction resource for all libraries, this comes highly recommended."—School Library Journal, Starred Review

"Using very simple terms and aided by Raff's whimsical illustrations, Adler introduces young readers to the concepts of gravity, mass, weight, inertia, and resistance. Everyday examples and objects are used to illustrate the principles, such as a ball rolling off a table or marbles falling through water. Each of these examples or activities could easily be replicated by readers at home or in the classroom." —School Library Connection