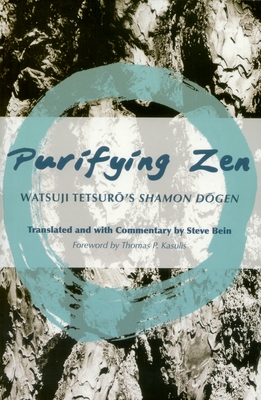 "Purifying Zen: Watsuji Tetsuro's Shamon Dogen makes available in a clear and fluid translation an early classic in modern Japanese philosophy. Steve Bein's annotations, footnotes, introduction, and commentary bridge the gap separating not only the languages but also the cultures of its original readers and its new Western audience." --from the Foreword by Thomas P. Kasulis

In 1223 the monk Dogen Kigen (1200-1253) came to the audacious conclusion that Japanese Buddhism had become hopelessly corrupt. He undertook a dangerous pilgrimage to China to bring back a purer form of Buddhism and went on to become one of the founders of Soto Zen, still the largest Zen sect in Japan. Seven hundred years later, the philosopher Watsuji Tetsuro (1889-1960) also saw corruption in the Buddhism of his day. Watsuji's efforts to purify the religion sent him not across the seas but searching Japan's intellectual past, where he discovered writings by Dogen that had been hidden away by the monk's own sect. Watsuji later penned Shamon Dogen (Dogen the monk), which single-handedly rescued Dogen from the brink of obscurity, reintroducing Japan to its first great philosophical mind. Purifying Zen is the first English translation of Watsuji's landmark book. A text intended to reacquaint Japan with one of its finest philosophers, the work delves into the complexities of individuals in social relationships, lamenting the stark egoism and loneliness of life in an increasingly Westernized Japan. In addition to an introduction that provides biographical details on Watsuji and Dogen, the translation is supplemented with a brief guide to the themes and ideas of Shamon Dogen, beginning with a consideration of the nature of faith and the role of responsibility in Watsuji's vision of Dogen's Zen. It goes on to examine the technical terms of Dogen's philosophy and the role of written language in Dogen's thought.