The Secret of the Hidden Scrolls: The Beginning, Book 1 (Paperback) 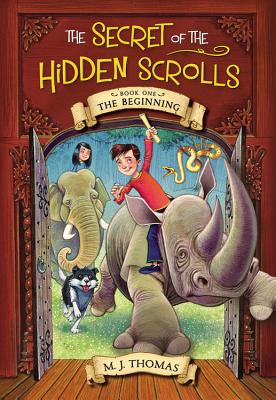 The Secret of the Hidden Scrolls: The Beginning, Book 1 (Paperback)


Not On Our Shelves—Ships in 1-5 Days
A mysterious scroll transports a brother and sister back in time to God's creation of the world in the first installment of this action-packed chapter book series for emerging readers.

The Secret of the Hidden Scrolls series follows siblings Peter and Mary and their dog, Hank, as they discover ancient scrolls that transport them back to key moments in biblical history.

In the first adventure in the series, Peter and Mary find themselves witnesses to the creation of the world just as God is speaking it into existence. Can they unlock the mystery of the scrolls before they get trapped in history forever? Children will discover the answer as the two characters ride rhinos, meet the angel Michael, and talk to a certain snake in the Garden of Eden. Riveting text and engaging illustrations bring this beloved Bible story to riotous life.
Mike Thomas grew up in Florida playing sports and riding his bike to the library and an arcade named the Cosmic Cowboy. He graduated from Liberty University, earning a bachelor's degree in Bible Studies. When his son Peter was nine years old, Mike went searching for books that would teach Peter about the Bible in a fun, imaginative way. Finding none, he decided to write his own series. Mike Thomas lives in Murfreesboro, Tennessee, with his wife, Lori; sons Payton and Peter; and their dog, Hank.