Called Again: A Story of Love and Triumph (Paperback) 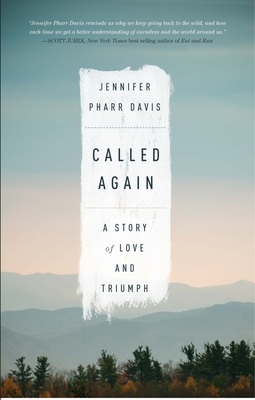 Called Again: A Story of Love and Triumph (Paperback)


Special Order—Subject to Availability
In 2011, Jennifer Pharr Davis became the overall record holder on the Appalachian Trail. By hiking 2,181 miles in 46 days—an average of 47 miles per day—she became the first female to ever set that mark. But this is not a book about records or numbers; this is a book about endurance, faith, and, most of all, love.

The most amazing part of this story is not found at the finish, but is discovered through the many challenges, lessons and relationships that present themselves along the trail. This is Jennifer's story, in her own words, about how she started this journey with a love for hiking and more significantly a love for her husband Brew. Together, they were able to overcome rugged mountains and raging rivers, sleet storms and 100 degree heat, shin-splints and illnesses. They made new friends and tested old friendships; they shared together laughter, and tears—a lot of tears. But, through it all, they fell more in love with one another and with the wilderness.

By completing this extraordinary amateur feat, Jennifer rose above the culture of multi-million dollar sports contracts that is marked by shortcuts and steroids. This is the story of a real person doing something remarkable. Jennifer Pharr Davis is a modern role-model for women—and men. She is an authentic hero.
Jennifer Pharr Davis grew up in the North Carolina Mountains, where she developed a love for hiking at a young age. At age twenty-one, Jennifer hiked the entire Appalachian Trail as a solo female and fell in love with long-distance backpacking. Since then, Jennifer has hiked more than 11,000 miles on six different continents, with North American hikes including the Pacific Crest Trail, Vermont's Long Trail, and the Colorado Trail, and completed three thru-hikes on the Appalachian Trail. She has hiked and traveled on six continents; some of the highlights include Mount Kilimanjaro, the Inca Trail to Machu Picchu, and the 600-mile Bibbulmun Track in Australia. In the summer of 2011, Jennifer topped her own 2008 Women's Endurance Record for the fastest thru-hike on the Appalachian Trail, making her the overall record holder for both women and men. Jennifer is the first woman to hold the overall title. Jennifer hiked from Katahdin, Maine to Springer Mountain, Georgia. Her goal was to hike the entire 2,180-mile faster than the current overall speed record of 47 days, 13 hours and 31 minutes, which she did in 46 days. To break the record, Jennifer hiked an average of 47 miles a day, camping along the trail. She had trail support from legendary ultra-runner and former AT and Pacific Crest Trail speed record holder David Horton, as well as veteran AT expert Warren Doyle and Davis' husband, Brew Davis. Her hiking and backpacking accomplishments, as well as her influence as an outdoor role model, are remarkable and momentous. Jennifer is a 2012 National Geographic Top Adventurer of the Year nominee for her record-breaking thru-hike, has been on CNN, The Early Show, NPR numerous times, and was featured in Fitness Magazine and Shape magazine, among others. Jennifer has also written for Trail Runner magazine, Away.com, is a frequent contributor to Blue Ridge Outdoors Magazine, and has written three guidebooks. Jennifer lives in Asheville, North Carolina, with her husband, and is the owner and founder of Blue Ridge Hiking Co.