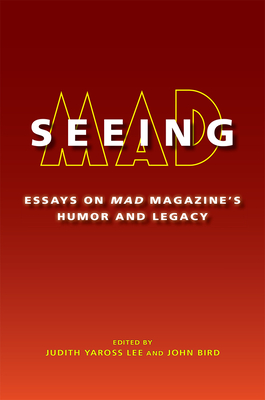 
Special Order—Subject to Availability
“Seeing Mad” is an illustrated volume of scholarly essays about the popular and influential humor magazine Mad, with topics ranging across its 65-year history—up to last summer’s downsizing announcement that Mad will publish less new material and will be sold only in comic book shops.

Mad magazine stands near the heart of post-WWII American humor, but at the periphery in scholarly recognition from American cultural historians, including humor specialists. This book fills that gap, with perceptive, informed, engaging, but also funny essays by a variety of scholars. The chapters, written by experts on humor, comics, and popular culture, cover the genesis of Mad; its editors and prominent contributors; its regular features and departments and standout examples of their contents; perspectives on its cultural and political significance; and its enduring legacy in American culture.
Judith Yaross Lee is Distinguished Professor Emerita of Communication Studies, Rhetoric, and Public Culture at Ohio University. She is the author of three books, including Twain’s Brand: Humor in Contemporary American Culture and Defining New Yorker Humor. John Bird is Emeritus Professor of English at Winthrop University, author of Mark Twain and Metaphor (University of Missouri Press), and editor of Mark Twain in Context.
“A nostalgic romp through the pages of Mad that will appeal to both scholars and non-academic audiences.”—Amy Kiste Nyberg, Seton Hall University, author of Seal of Approval: The History of the Comics Code

“POTRZEBIE! It’s an understatement to say that MAD warped the comedic sensibilities of at least 2.3458697 generations. It absolutely deserves this scholarly/hilarious/illuminating examination of its history and legacy. Though I admit, I can’t wait to read the MAD parody of this book, too.” —John Hodgman, comedian, actor, and author of Medallion Status: True Stories from Secret Rooms

"You don't need a PhD to read Mad, but you might want one for this insightful, dissection of the magazine's history and inspired creators. If you think you know everything about that meshugenah publication, think again. You're in for a deep-dive treat."—Peter Kuper, co-founder of World War 3 Illustrated, author and illustrator of MAD magazine’s SPY vs. SPY

“MAD is one of the most influential achievements in both comics history and humor studies, and yet surprisingly scant scholarship documents its generation-spanning impact—until now! Lee & Bird have recruited a team of thoughtful contributors (and not just the Usual Gang of Idiots) to produce a long overdue and expertly crafted anthology that provides perspective on MAD’s history, humor, and ongoing influence on comics and humor studies. Anyone reading Seeing MAD not only comes away with a deeper appreciation for the venerable publication but anticipates the next wave of scholarship that this anthology will inspire.”—Matthew J. Smith, co-editor of More Critical Approaches to Comics: Theories and Methods

"Some may think that Mad Magazine was just a humor magazine; they are so wrong. Seeing Mad puts the irreverent publication into context. The fascinating essays and interviews deeply explain how, one young reader at a time, Mad Magazine was a catalyst for cultural change. I grew up on Mad, it helped my young cartoonist's mind to question the world around me. Even though early on in my life I set my sites on The New Yorker—another irreverent publication yet much less accessible to youth—Mad Magazine gave me a world that I felt was mine: cartoons, humor and social commentary."—Liza Donnelly, New Yorker cartoonist