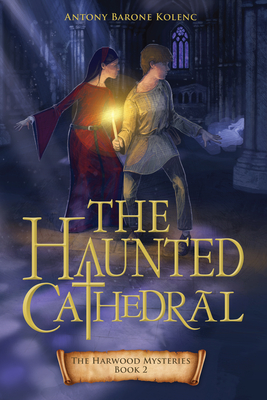 This is book number 2 in the The Harwood Mysteries series.

An ill-fated journey, a long-lost uncle, and a mysterious cathedral mark the next chapter in the life of Xan, an orphan in search of his destiny. For a year, he has lived in the care of Benedictine monks at Harwood Abbey. Now he learns that he has an uncle, said to live in the far-off city of Lincoln.

Will Xan survive the trip alongside the prisoner Carlo and his cruel guards?
Will he find Uncle William?
And why is Xan drawn to the spirit that haunts Lincoln Cathedral—could a ghost reconnect Xan with his dead parents?

Join Xan and his friends to solve the mystery of The Haunted Cathedral.
Antony Barone Kolenc retired as a Lieutenant Colonel from the U.S. Air Force Judge Advocate General’s Corps after 21 years of military service. He is a law professor who teaches courses on constitutional and military law and has been published in numerous journals and magazines, and he speaks at legal, writing, and home education events.