The Far Side® Gallery (Paperback) 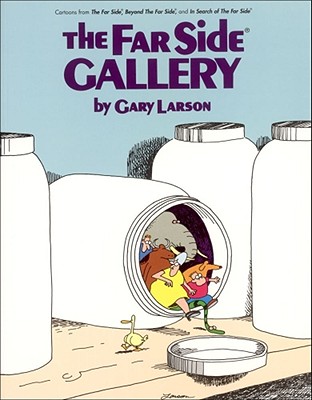 The Far Side® Gallery (Paperback)

This is book number 4 in the Far Side series.

Copyright © 1984 FarWorks, Inc. All rights reserved.
The Far Side®, FarWorks, Inc.®, and the Larson® signature are registered trademarks of FarWorks, Inc. in certain countries.
Gary Larson was born August 14, 1950, in Tacoma, Washington. Always drawn to nature, he and his older brother spent much of their youth exploring the woods and swamps of the Pacific Northwest, and the tidelands and waters of Puget Sound.

Though he loved to draw as a child, Larson didn’t formally study art, nor did he consider being a cartoonist. He graduated in 1972 from Washington State University with a degree in communications but took many classes in the sciences. In 1990, Larson received the Regents’ Distinguished Alumnus Award and was the centennial commencement speaker. His talk was titled “The Importance of Being Weird.” His interest in science was a frequent topic in many of The Far Side® cartoons, which he created for fifteen years, from January 1, 1980, to January 1, 1995.

In 1994, Larson debuted a twenty-two-minute version of his first animated film, Gary Larson’s Tales From The Far Side®, as a Halloween special on CBS television, and it quickly became a cult favorite. The film won the Grand Prix at the 1995 Annecy International Animated Film Festival in France. That film and its sequel, Gary Larson’s Tales From The Far Side® II, were selected for numerous international film festivals, including Venice, Brussels, and Telluride, and were broadcast in various foreign countries. Both were produced with traditional cel animation, completely hand-inked and painted.

Music has also been an important part of Larson’s life. He started playing the guitar at an early age, moved to the banjo for a few years, and then ultimately returned to the guitar. Since retiring from daily newspaper syndication, Larson has focused his creative efforts on the guitar and his passion for jazz.

At the end of its run, The Far Side® appeared in nearly two thousand newspapers. It in turn spawned twenty-three The Far Side® books, including sixteen collections, five anthologies, and two retrospectives, twenty-two of which appeared on the New York Times Best Sellers list. Over the years, more than forty-one million books and seventy-nine million calendars have been sold, and The Far Side® has been translated into more than seventeen languages.

As for his inspiration, Larson often cites his family’s “morbid sense of humor” growing up and how his older brother loved to scare him whenever he got the chance. He was also once quoted as saying, “You know those little snow globes that you shake up? I always thought my brain was sort of like that. You know, where you just give it a shake and watch what comes out and shake it again.” He attributes much of his success to the caffeine in the coffee he drinks daily.

“A magnificent contribution to popular culture.” (The Washington Post)

“Samuel Taylor Coleridge, in between opium binges, once distinguished poetry from prose by noting that the former comprises ‘the best words in theirbest order.’ Gary Larson’s achievement in The Far Side® is to have pulled off much the same thing in a humbler medium: the best joke told with the best image … there is no excuse not to have some Larson in your life.” (The Daily Beast)

“Larson communicates a great deal of information in a few simple ink lines. The expressions of his characters are vivid and immediately recognizable … And with just a strand of beads and a pair of harlequin glasses, he can somehow transfer any animal—a shark, a bug, a warthog—into a dowdy suburban hausfrau.” (The Los Angeles Times)

“In an age when black humor is a lost art, Larson’s cartoon is an island of insanity, offering us theperspective of a world where the unreal is normal and vice versa. Its message deep down is a dark one — something about taking ourselves too seriously and strutting around as if we own the place.” (Rolling Stone)

“Bless Gary Larson for his wonderful consistency in casting an artful eye on all of Earth’s wild critters, human or otherwise.” (The Philadelphia Inquirer)

“A quirky, brilliant series of cartons that most often feature a variety of insects and animals embroiled in some warped situation comedy.” (Toronto Globe and Mail)