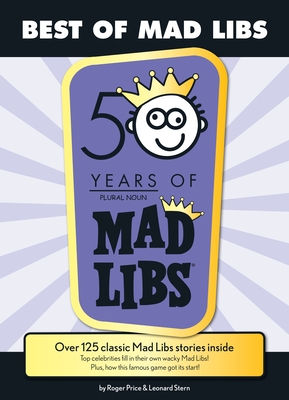 Mad Libs is the world’s greatest word game and the perfect gift or activity for anyone who likes to laugh! Write in the missing words on each page to create your own hilariously funny stories with the Best of Mad Libs!

The very best ridiculousness Mad Libs has to offer, like PLURAL NOUN swimming in the PLACE! With 125 classic "fill-in-the-blank" stories about scalp care, how to go to sleep, and beauty advice, there's something in this deluxe Mad Libs for everyone. Play alone, in a group, or in the solar system! Mad Libs are a fun family activity recommended for ages 8 to NUMBER.

This deluxe edition includes:
- Silly stories: 125 classic Mad Libs!
- A history of Mad Libs: straight from the creator, Leonard Stern (complete with pictures)!
- Language arts practice: Mad Libs are a great way to build reading comprehension and grammar skills.
-  Fun With Friends: each story is a chance for friends to work together to create unique stories!
Roger Price and LeonardStern created Mad Libs in the 1950s and the series has been a favorite among kids of all ages ever since. Although Roger Price passed away in 1990, Leonard Stern keeps the tradition alive by writing new Mad Libs all the time.

Roger Price and Leonard Stern are both well known for their comedywriting. In the 1950s Roger Price created and developed cartoons called Droodles, which were turned into a television show. Before that Price worked with Bob Hope on a newspaper humor column, and he even appeared on Broadway in Tickets, Please!
Leonard Stern has an equally colorful and varied history. Before co-founding Price Stern Sloan with Roger Price (Sloan came later), Stern was a successful television writer. In addition to his creative involvement with over twenty television series and over ten motion pictures, Stern worked with Jackie Gleason in New York writing the Honeymooners. He also wrote for the Phil Silvers Show, The Steve Allen Show, and wrote and produced the original Get Smart television series. Recently, Stern published A Martian Wouldn't Say That, which compiled weird and wacky memos written by people in the entertainment industry.Currently, Stern serves as a senior vice president of Price Stern Sloan, where he still writes those hilarious Mad Libs.