Genocide in German South-West Africa: The Colonial War of 1904–1908 and Its Aftermath (Paperback) 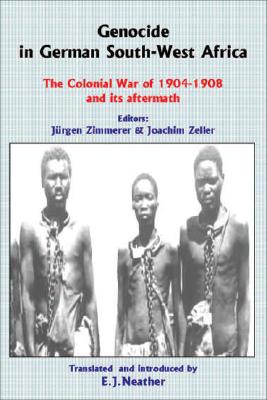 Genocide in German South-West Africa: The Colonial War of 1904–1908 and Its Aftermath (Paperback)


Special Order—Subject to Availability
The 1904 war that broke out in present day Namibia after the Herero tribe rose against an oppressive colonial regime—and the German army’s brutal suppression of that uprising—are the focus of this collection of essays. Exploring the annihilation of both the Herero and Nama people, this selection from prominent researchers of German imperialism considers many aspects of the war and shows how racism, concentration camps, and genocide in the German colony foreshadow Hitler’s Third Reich war crimes.
Jürgen Zimmerer teaches history at the Center for 20th Century Interdisciplinary Studies at the University of Coimbra in Portugal. Joachim Zeller teaches at the Technical University in Berlin. E. J. Neather is the author of Mastering German 2, Previsions, and Realisations.