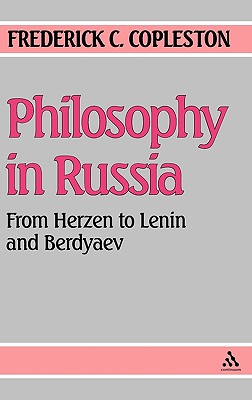 
Not On Our Shelves—Ships in 1-5 Days
(This book cannot be returned.)
Philosophy in Russia covers its subject broadly and in detail from the eighteenth century to Lenin and beyond into the post-Stalin period. It offers a continuous history of the development of philosophical thought in Russia, and portraits of individual and influential thinkers. The author devotes careful analysis to radicals such as Bakunin, Herzen, Chernyshevsky and Lavrov, and to the Marxists such as Plekhanov and Lenin. He also discusses the thought of writers such as Kireevsky, Leontiev and Solovyev, and examines the philosophically relevant ideas of Dostoevsky and Tolstoy. He also discusses Russian thinkers in exile, such as Berdyaev, Frank, N. O. Lossky and Shestov.For historical reasons philosophical thought in Russia has tended to become socially or politically committed thought. To what extent genuine philosophical thought has proved to be compatible with the monopoly enjoyed by Marxism-Leninism in the fields of education and publishing is a crucial question discussed in this authoritative study.
Frederick C. Copleston is Emeritus Professor of the History of Philosophy in the University of London and former Principal of Heythrop College.