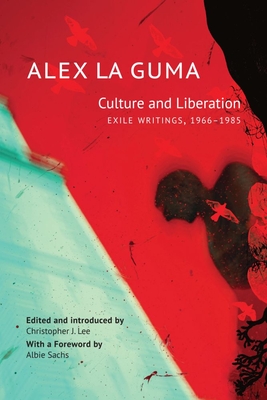 
Special Order—Subject to Availability
One of South Africa’s best-known writers during the apartheid era, Alex La Guma was a lifelong activist and a member of the South African Communist Party and the African National Congress. Persecuted and imprisoned by the South African regime in the 1950s and 60s, La Guma went into exile in the United Kingdom with his wife and children in 1966, eventually serving as the ANC’s diplomatic representative for Latin America and the Caribbean in Cuba. Culture and Liberation captures a different dimension of his long writing career by collecting his political journalism, literary criticism, and other short pieces published while he was in exile.

This volume spans La Guma’s political and literary life in exile through accounts of his travels to Algeria, Lebanon, Vietnam, Soviet Central Asia, and elsewhere, along with his critical assessments of Paul Robeson, Nadine Gordimer, Maxim Gorky, Alexander Solzhenitsyn, and Pablo Neruda, among other writers. The first dedicated collection of La Guma’s exile writing, Culture and Liberation restores an overlooked dimension of his life and work, while opening a window on a wider world of cultural and political struggles in Africa, Asia, and Latin America during the second half of the twentieth century.

Alex La Guma (1925–1985) was a South African novelist and leader of the South African Coloured People’s Organisation (SACPO). Several of his books were published in the famed African Writers Series edited by Chinua Achebe, including A Walk in the Night, In the Fog of the Seasons’ End, and Time of the Butcherbird.

Christopher J. Lee is associate professor of history at Lafayette College, in Pennsylvania. He is the author of several books, including Jet Lag and Frantz Fanon: Toward a Revolutionary Humanism.

Albie Sachs is an activist and a former judge on the Constitutional Court of South Africa. After having his arm blown off by a car-bomb in Mozambique in 1988 due to his opposition to apartheid, he fled to the US, but later returned to South Africa. He currently resides in Cape Town.

Bill Nasson is professor of history at the University of Stellenbosch and is one of South Africa’s leading historians. In 2011 he won the Recht Malan Prize for Best Non-Fiction for The War for South Africa: The Anglo-Boer War 1899–1902, which was also shortlisted for the Alan Paton Award.