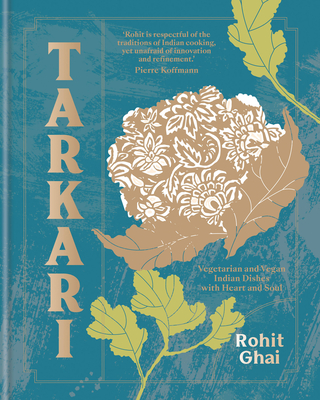 
Not On Our Shelves—Ships in 1-5 Days
Vegetarian and Vegan Indian Recipes from a Michelin-starred chef  With food inspired by India's incredibly rich and varied food scene, Rohit Ghai has gained a reputation for colorful, flavor-rich curries that showcase both classic and lesser-known Indian flavors. Tarkari, meaning 'vegetable' in Urdu, is Rohit's first book and also celebrates this diverse heritage - but on a more personal note. Packed with innovative vegetarian and vegan dishes, it pays homage to the food his parents ate. From creative starters like Malabar Cauliflower, to big, bold curries such as Jackfruit Masala and Lotus Root Kofta, as well as breads, rice, dips and pickles, it includes everything you need to cook truly spectacular Indian vegetarian and vegan meals at home. 'Rohit Ghai's backstory is the stuff of culinary legend.' - GQ
Rohit Ghai's love affair with food began in his mother's kitchen, in his native Punjab, India. He went on to study Indian cuisine at the Institute of Hotel Management in New Delhi, before perfecting his craft at esteemed hotel groups across the country. After moving to the UK, Rohit worked in and headed kitchens at some of London's leading Indian restaurants including Benares, Trishna, Gymkhana, Hoppers and most recently Jamavar and Bombay Bustle. Rohit is the first Indian chef to have won a Michelin star - for Jamavar within ten months of the restaurant's opening. In 2018, he and Abhishake Sangwan (formerly Gymkhana and Jamavar) launched their first solo London restaurant, Kutir.
“The Punjabi chef behind some of London's best Indian restaurants (like the new Manthan, in Mayfair) proves that Indian cooking doesn't have to be synonymous with lengthy, complicated recipes. The flavorful vegetarian and vegan dishes — tarkari means "vegetable" in Urdu — come together quickly and offer seasonal adaptability”—Travel + Leisure