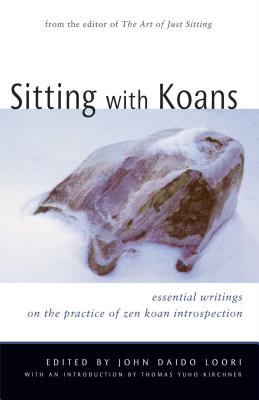 
Special Order—Subject to Availability
The Zen tradition has just two main meditative practices: shikantaza, or "just sitting"; and introspection guided by the powerful Zen teaching stories called koans. Following in the tradition of The Art of Just Sitting (endorsed as a "A book we have needed for a long, long time"), this new anthology from John Daido Loori illuminates the subtle practice of koan study from many different points of view.

John Daido Loori was, until his death in 2009, the spiritual leader and abbot of Zen Mountain Monastery in Mt. Tremper, New York. Trained in koan Zen as well as in the subtle school of Master Dogen's Zen, he was the Dharma heir of Hakuyu Taizan Maezumi Roshi. Devoted to maintaining authentic Zen training, he developed a distinctive style, called the Eight Gates of Zen, based on the noble eightfold path. Drawing on his background as scientist, artist, naturalist, and Zen priest, Abbot Loori was an American master who spoke directly to students from the perspective of a common background. His books include Mountain Record of Zen Talks and The Heart of Being.
"Sitting with Koans provides an excellent start toward such understanding, offering the reader--whether veteran meditator, inquiring novice, or simply interested observer--a careful and well-organized presentation of classic and modern source materials on many aspects of traditional koan work."
— from the foreword by Thomas Yuho Kirchner

"Roshi Daido Loori has provided us with a valuable tool for appreciating the living tradition of koan study."
— Gerry Shishin Wick, author of The Book of Equanimity

"A handy compendium of some of the most important writings on the topic by scholars and Zen masters."
— Buddhadharma: The Practitioner's Quarterly

"This is a remarkable collection of essays and sermons by eminent scholars and leading Zen masters covering a full range of historical materials and diverse approaches in the formation of koan studies in China and Japan, as well as commentary on numerous specific cases. One volume brilliantly put together by a premier modern interpreter of koans, John Daido Loori, illuminates both issues of historical development and the discovery of contemporary meaning and application in religious practice."
— Professor Steven Heine, editor of The Zen Canon: Understanding the Classic Texts