Children of the Stars: Indigenous Science Education in a Reservation Classroom (Paperback) 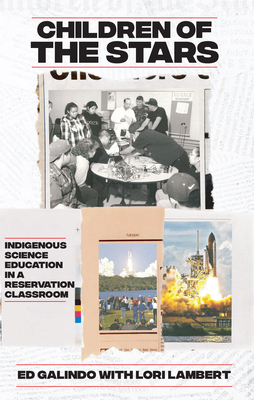 Children of the Stars: Indigenous Science Education in a Reservation Classroom (Paperback)

By Ed Galindo, Lori Lambert (With)


Not On Our Shelves—Ships in 1-5 Days
In the 1990s, Ed Galindo, a high school science teacher on the Fort Hall Reservation in Idaho, took a team of Shoshone-Bannock students first to Johnson Space Center in Texas and then to Kennedy Space Center in Florida. These students had submitted a project to a competitive NASA program that was usually intended for college students—and they earned a spot to see NASA astronauts test out their experiment in space. The students designed and built the project themselves: a system to mix phosphate and water in space to create a fertilizer that would aid explorers in growing food on other planets.

In Children of the Stars, Galindo relates his experience with this first team and with successive student teams, who continued to participate in NASA programs over the course of a decade. He discusses the challenges of teaching American Indian students, from the practical limits of a rural reservation school to the importance of respecting and incorporating Indigenous knowledge systems. In describing how he had to earn the trust of his students to truly be successful as their teacher, Galindo also touches on the complexities of community belonging and understanding; although Indigenous himself, Galindo is not a member of the Shoshone-Bannock tribes and was still an outsider who had as much to learn as the students.

Children of the Stars is the story of students and a teacher, courage and hope. Written in a conversational style, it’s an accessible story about students who were supported and educated in culturally relevant ways and so overcame the limitations of an underfunded reservation school to reach great heights.
Ed Galindo (Yaqui) is associate director for education and diversity at the NASA Idaho Space Grant Consortium and former faculty member at the University of Idaho and affiliate faculty at Idaho State University and Utah State University. During his career as a high school science teacher, he was twice named National Indian Teacher of the Year by the National Indian School Board Association.