The Lucifer Principle: A Scientific Expedition Into the Forces of History (Paperback) 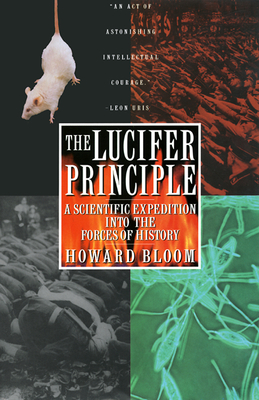 The Lucifer Principle: A Scientific Expedition Into the Forces of History (Paperback)

The Lucifer Principle is a revolutionary work that explores the intricate relationships among genetics, human behavior, and culture to put forth the thesis that "evil" is a by-product of nature's strategies for creation and that it is woven into our most basic biological fabric.

In a sweeping narrative that moves lucidly among sophisticated scientific disciplines and covers the entire span of the earth's, as well as mankind's, history, Howard Bloom challenges some of our most popular scientific assumptions. Drawing on evidence from studies of the most primitive organisms to those on ants, apes, and humankind, the author makes a persuasive case that it is the group, or 'superorganism," rather than the lone individual that really matters in the evolutionary struggle. But, Bloom asserts, the prominence of society and culture does not necessarily mitigate against our most violent, aggressive instincts. In fact, under the right circumstances, the mentality of the group will only amplify our most primitive and deadly urges.

In Bloom's most daring contention he draws an analogy between the biological material whose primordial multiplication began life on earth and the ideas, or 'memes," that define, give cohesion to, and justify human superorganisms. Some of the most familiar memes are utopian in nature" Christianity or Marxism; nonetheless, these are fueled by the biological impulse to climb to the top of the hierarchy. With the meme's insatiable hunger to enlarge itself, we have a precise prescription for war.

Biology is not destiny, but human culture is not always the buffer to our most primitive instincts we would like to think it is. In these complex threads of thought lies the Lucifer Principle, and only through understanding its mandates will we able to avoid the nuclear crusades that await us in the twenty-first century.

A philosophical look at the history of our species which alternated between fascinating and frightening. Reading it was like reading Dean Koontz or Stephen King: I couldn’t put it down . . . . Masterful.” Mark Graham, The Rocky Mountain News

The Lucifer Principle is a long step forward to understand human biology. Its original assessment is brilliant; its historical facts are unassailable . . . . An outstanding book.” Dr. Richard Bergland, M.D., founder of the Department of Neurology, Sloan-Kettering, and author of The Fabric of the Mind

A revolutionary vision of the relationship between psychology and history, The Lucifer Principle will have a profound impact on our concepts of human nature. It is astonishing that a book of such importance could be such a pleasure to read.” Elizabeth F. Loftus, author of Mindfulness

Destined to be the Future Shockof our time.” Spin

The Lucifer Principle is a tour de force, a brilliant and seminal work.” Sol Gordon, Ph.D., founder of the Institute for Family Research and Education

Readers will be mesmerized by the mirror Bloom holds to the human condition . . . . his style is engaging, witty, and brisk . . . . He draws on a dozen years of research into a jungle of scholarly fields . . . and meticulously supports every bit of information.” The Washington Post

A revolutionary vision of the relationship between psychology and history, The Lucifer Principle will have a profound impact on our concepts of human nature. It is astonishing that a book of such importance could be such a pleasure to read.” Elizabeth F. Loftus, Professor of Psychology, University of Washington, and author of Memory and Eyewitness Testimony

The Lucifer Principle is the Bible of anyone who wants to know what in the hell is going on. . . . This book tells our story. It is the blueprint of our past and the justification of our presence in Afghanistan and Iraq.” Shelly Marshall, Metapsychology