The Death of Ivan Ilyich and Confession (Paperback) 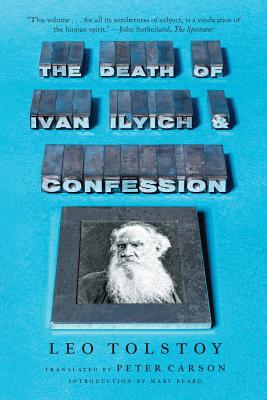 The Death of Ivan Ilyich and Confession (Paperback)

“Over the past hundred years we have had numerous versions . . . of [Tolstoy’s] major works. This volume, however, is arguably the best so far.” —Times Literary Supplement

In the last two days of his own life, Peter Carson completed these new translations of The Death of Ivan Ilyich and Confession before he succumbed to cancer in January 2013. Carson, the eminent British publisher, editor, and translator who, in the words of his author Mary Beard, “had probably more influence on the literary landscape of [England] over the past fifty years than any other single person,” must have seen the irony of translating Ilyich, Tolstoy’s profound meditation on death and loss, “but he pressed on regardless, apparently refusing to be distracted by the parallel of literature and life.” In Carson’s shimmering prose, these two transcendent works are presented in their most faithful rendering in English. Unlike so many previous translations that have tried to smooth out Tolstoy’s rough edges, Carson presents a translation that captures the verisimilitude and psychological realism of the original Russian text.

Leo Tolstoy (1828-1910), a giant of world literature, is the author of many classics, including War and Peace and Anna Karenina.

Peter Carson (1938–2013) was the editor in chief of Penguin UK and Profile Books and the translator of Fathers and Sons by Turgenev and the plays of Anton Chekhov. He lived in London until his death.

A professor of classics at Cambridge University, Mary Beard is the author of the best-selling SPQR and Women & Power and the National Book Critics Circle Award–nominated Confronting the Classics. A popular blogger and television personality, Beard is a regular contributor to the New York Review of Books.
This wonderful modern edition of Tolstoy’s The Death of Ivan Ilyich appears side by side with the autobiographical Confession in a new translation by Peter Carson—perhaps even more remarkable for having been completed as Carson, a famed editor and previous translator of works by Turgenev and Chekhov, was himself dying…. Death has seldom been more starkly or plainly rendered…. Among the best treatments of death and belief in any art form…. A generous remembrance of Peter Carson by Mary Beard and a note comparing past translations complement an accomplishment in literature that belongs in every library.

If you had one year to live, how would you spend it? That’s a question most of us wouldn’t know how to answer but for one British publisher and translator it was easy: to translate Tolstoy’s great story about a dying man, The Death of Ivan Illyich….

This volume…for all its somberness of subject, is a vindication of the human spirit.
— John Sutherland - The Spectator