Troublemaker for Justice: The Story of Bayard Rustin, the Man Behind the March on Washington (Paperback) 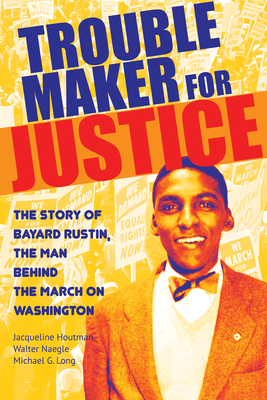 Troublemaker for Justice: The Story of Bayard Rustin, the Man Behind the March on Washington (Paperback)

A biography for younger readers about one of the most influential activists of our time, who was an early advocate for African Americans and for gay rights.

Bayard had an unshakable optimism, nerves of steel, and, most importantly, a faith that if the cause is just and people are organized, nothing can stand in our way.--President Barack Obama

Bayard Rustin was one of the great organizers and activists of the Civil Rights Movement. Without his skill and vision, the historic impact of the March on Washington might not have been possible. I am glad this biography will make young people aware of his life and his incredible contribution to American history.--Congressman John Lewis

'We need, in every community, a group of angelic troublemakers, ' declared Bayard Rustin in the late 1940s. A proponent of nonviolent resistance and a stalwart figure in the civil rights movement, Rustin organized a profound and peaceful milestone in American history--the 1963 March on Washington. . . . Troublemaker for Justice describes not only how Rustin orchestrated the March on Washington in two months but also how he stood up for his Quaker principles throughout his life. The three authors, Jacqueline Houtman, Walter Naegle and Michael G. Long, show the difficulties Rustin faced as a gay black man in 20th-century America, and that he shouldered them with strength, intelligence, and a quest for peace and justice.--Abby Nolan, The Washington Post

In today's political landscape, this volume is a lesson in the courage to live according to one's truth and the dedication it takes to create a better world.--Kirkus Reviews, *Starred Review

This biography is an indispensable addition to the literature of both civil and gay rights.--Michael Cart, Booklist, *Starred review

Bayard Rustin was a major figure in the Civil Rights movement. He was arrested on a bus 13 years before Rosa Parks and he participated in integrated bus rides throughout the South 14 years before the Freedom Riders. He was a mentor to Dr. Martin Luther King, Jr., teaching him the techniques and philosophy of Gandhian nonviolent direct action. He organized the March on Washington in 1963, one of the most impactful mobilizations in American history.

Despite these contributions, few Americans recognize his name, and he is absent from most history books, in large part because he was gay. This biography traces Rustin's life, from his childhood and his first arrest in high school for sitting in the "whites only" section of a theater, through a lifetime of nonviolent activism.

Authors Jacqueline Houtman, Walter Naegle, and Michael G. Long provide middle and high school students with a biography of Rustin that illustrates how the personal is political. Young readers will take away valuable lessons about identity, civics, and 20th-century history.--Rethinking Schools

Michael G. Long is the author or editor of numerous books on civil rights, religion, and politics, including We the Resistance: Documenting A History of Nonviolent Protest in the United States; Race Man: Selected Works of Julian Bond; I Must Resist: Bayard Rustin's Life in Letters; Marshalling Justice: The Early Civil Rights Letters of Thurgood Marshall; and First Class Citizenship: The Civil Rights Letters of Jackie Robinson. Long has written for the Los Angeles Times, the Chicago Tribune, ESPN's The Undefeated, and USA Today, and his work has been featured or reviewed in the New York Times, the Washington Post, Mother Jones, and many others. Long has spoken at Fenway Park, the Central Intelligence Agency, the Smithsonian, the Library of Congress, and the National Archives, and he has appeared on MSNBC, PBS, C-SPAN, and National Public Radio. Jacqueline Houtman is the author of the award-winning children's book The Reinvention of Edison Thomas, and earned a PhD in Medical Microbiology and Immunology from the University of Wisconsin-Madison. Her science writing for adults and children has appeared in World Book Science Year, FASEB's Breakthroughs in Bioscience series, Cleveland Clinic Magazine, The Dana Foundation's Progress in Brain Research, The Dana Sourcebook of Immunology and numerous academic and educational publications. Her debut novel, The Reinvention of Edison Thomas, was published by Boyds Mills Press in 2012. Walter Naegle is the former partner of the American Civil Rights leader Bayard Rustin and is executive director of the Bayard Rustin Fund, which commemorates Rustin's life, values, and legacy.