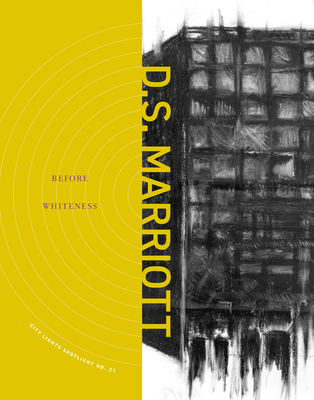 A book that turns Blackness into a question of reading, of inscribing and decoding Blackness in poetry, Before Whiteness ranges from medieval Beowulf to contemporary UK grime. Born in Britain but now living in the U.S., D.S. Marriott trains his analytical gaze on grim American subjects like the Middle Passage and lynchings, yet also finds inspiration in African American poets and artists. The book ends with "Another Burning," a mournful elegy for the victims of the 2017 Grenfell Tower fire in London and stirring rebuke of the structural racism of contemporary UK society.

"In Before Whiteness, Marriott inhabits the names we remember, such as Lester Young and Dambudzo Marechera, and victims of the Grenfell Tower fire, names we never knew. All of them people who have no place at the table where the Human family feasts. 'Blackness /' Marriott reminds us, 'wasn't in the language--we saw it / being evacuated / but we still inhabited / the ashes.' These are not poems for the faint of heart, or those in need of denouncements. But with the evocative language of a wordsmith and the fearless insights of a philosopher, these poems guide us through the inner life of social death."--Frank B. Wilderson III, author of Afropessimism

"The mature poetry of the British-Caribbean poet D. S. Marriott is often possessed by a majestic full-throatedness, but Before Whiteness makes audible his more intimate tone, the sound of an approachable vulnerability. Before whiteness comes infancy, a time before language and the impingement of the white world, but this writing also stands in the face of whiteness, can stand against whiteness. Its words may be placed on white ground, the long history of English verse, but also are hauled from a dense Black record of suffering, resistance and joy. ... Only a great poet's writing can be at once so rich with echoes, so exacting in its thought, and so emotionally open."--John Wilkinson, author of My Reef My Manifest Array and Lyric in Its Times

Poet and scholar D.S. Marriott was born in Nottingham and educated at the University of Sussex, UK. He is the author of the poetry collections Incognegro (Salt, 2006), Hoodoo Voodoo (Shearsman, 2008), The Bloods (Shearsman, 2011), and Duppies (Commune Editions, 2019). His chapbooks include In Neuter (Equipage, 2012) and Lative (Equipage, 1992). His work is sometimes associated with the Cambridge school of poetry. In his critical and creative work, Marriott, of Jamaican heritage, draws on postcolonial thought and thinkers such as Frantz Fanon and is a leading theorist of Afro-pessimism. His critical books include On Black Men (Edinburgh University Press and Columbia University Press, 2000), Haunted Life (Rutgers University Press, 2007), and Whither Fanon? Studies in the Blackness of Being (Stanford University Press, 2018). He has taught at many universities and is currently based in Oakland, CA.