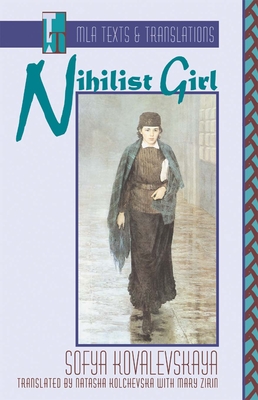 
Backordered
First published in Switzerland in 1892, finally printed in Russia in 1906, and never before translated into English, Nihilist Girl is the coming-of-age story of Vera Barantsova, a young aristocrat who longs to devote her life to a cause. Her privileged world is radically changed by Alexander I's emancipation of the serfs. Vera first hopes to follow in the footsteps of Christian martyrs, but a neighboring landowner--a liberal professor fired from his position at Saint Petersburg University and exiled to his estate--opens her eyes to the injustice in Russia.

A blend of social commentary and psychological observation, Nihilist Girl depicts the clash between a generation of youth who find their lives caught up by political action and a society unwilling to abandon its patriarchal traditions.
Sofya Kovalevskaya (1850-91) was a mathematician whose contributions were acknowledged throughout Europe during her lifetime. She was the first European woman to receive a doctorate in mathematics and the first female member of the Russian Academy of Sciences. Since the 1980s, her literary writings have received renewed attention among scholars and readers. Natasha Kolchevska is professor emerita at the University of New Mexico. Her research interests include twentieth-century Russian literature and culture.