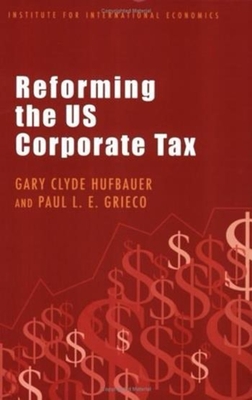 This is book number 76 in the Policy Analyses in International Economics series.

The mainstay of federal business taxation, the US corporate income tax, is riddled with distortions and inequities. As a means of taxing the richest Americans--a popular goal--the corporate income tax is a hopeless failure. Many companies pay no corporate tax, and among those that do, the burden is highly uneven. Meanwhile, the richest Americans command income from numerous sources besides corporate dividends. The distortions and inequities are amazing. Under pressure from business lobbies, Congress legislates deductions and exemptions that twist the corporate tax base far from any plausible financial definition; then Congress enacts "targeted" tax credits to carry out ersatz industrial policies. Faced with a tax terrain of mountains and ravines, corporations employ armies of lawyers and accountants to devise avoidance strategies. This book proposes to replace the corporate income tax with a tax that has a much broader base at a much lower rate. Two alternatives are explored: the National Retail Sales Tax (NRST) and the Corporate Activity Tax (CAT). To address the issue of regressivity, both alternatives are coupled with measures to preserve the real spending power of households at the lowest income levels.
Gary Clyde Hufbauer, Reginald Jones Senior Fellow since 1992, was formerly the Maurice Greenberg Chair and Director of Studies at the Council on Foreign Relations (1996-98), the Marcus Wallenberg Professor of International Finance Diplomacy at Georgetown University (1985-92), senior fellow at the Institute (1981-85), deputy director of the International Law Institute at Georgetown University (1979-81); deputy assistant secretary for international trade and investment policy of the US Treasury (1977-79); and director of the international tax staff at the Treasury (1974-76). Paul L. E. Grieco, doctoral student at Northwestern University's Department of Economics, was a research assistant at the Institute for International Economics. He coauthored "The Payoff to America from Global Integration" in the United States and the World Economy: Foreign Economic Policy for the Next Decade (2005) and assisted with NAFTA Revisited: Achievements and Challenges (2005).