I Begin with Spring: The Life and Seasons of Henry David Thoreau (Hardcover) 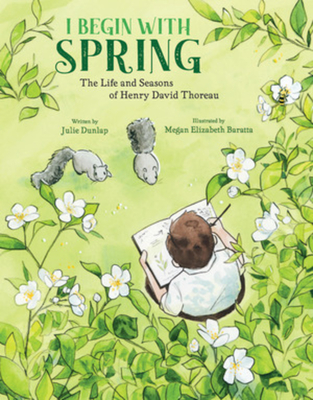 I Begin with Spring: The Life and Seasons of Henry David Thoreau (Hardcover)

Horn Book Starred Review: An excellent introduction to Thoreau and the turbulent times in which he lived.

One of Kirkus' Most Anticipated Children's Book of 2022

"A must read." - Elizabeth Bird, A Fuse 8 Production

Formatted like a nature notebook, this exploration of seasonal changes in Thoreau’s day is also a visual story of his life and times and a gentle introduction to climate change.

I Begin with Spring weaves natural history around Thoreau’s life and times in a richly illustrated field notebook format that can be opened anywhere and invites browsing on every page. Beginning each season with quotes from Thoreau’s schoolboy essay about the changing seasons, Early Bloomer follows him through the fields and woods of Concord, the joys and challenges of growing up, his experiment with simple living on Walden Pond, and his participation in the abolition movement, self-reliance, science, and literature.

The book’s two organizing themes—the chronology of Thoreau’s life and the seasonal cycle beginning with spring—interact seamlessly on every spread, suggesting the correspondence of human seasons with nature’s. Thoreau’s annual records of blooms, bird migrations, and other natural events scroll in a timeline across the page bottoms, and the backmatter includes a summary of how those dates have changed from his day to ours and what that tells us about the science of phenology and climate change.

Megan Baratta’s watercolors are augmented with historical images and reproductions of Thoreau’s own sketches to create a high-interest visual experience. The book includes a foreword from Thoreau scholar Jeffrey Cramer, Curator of Collections for the Walden Woods Project.

Julie Dunlap is a children’s book writer whose books have earned a Junior Library Guild Selection, a Boston Globe Pick of the Lists, a Teachers’ Choice from Learner Magazine, a Parents’ Choice Award, and an honorable mention for children’s books from the National Association for Humane and Environmental Education. Her children’s books include Louisa May and Mr. Thoreau’s Flute (Dial Books for Young Readers); Parks for the People: The Life of Frederick Law Olmsted; Extraordinary Horseshoe Crabs; and Coyotes and Bats (written under her pseudonym, Julia Vogel). She has also co-edited two anthologies for adult readers, Companions in Wonder: Children and Adults Exploring Nature Together (MIT Press) and Coming of Age at the End of Nature (Trinity University Press) and writes for environmental education organizations such as Interfaith Oceans and the Audubon Naturalist Society. She earned a PhD in social ecology from Yale University and teaches undergraduates about wildlife ecology and sustainability at the University of Maryland University College.

Megan Elizabeth Baratta is the illustrator of Most Days and I Begin with Spring, both of which received starred reviews. See more at barattastudio.com.

K-Gr 4–Henry David Thoreau, more commonly known for his literary works, is revealed to be a multi-layered gentleman in this refreshing biography. Written in descriptive prose and beautifully illustrated with drawings and primary resources, this is an exploration of the convergence of influences that shaped his philosophy and naturalist lifestyle. As an inquisitive and keenly observant child, Thoreau had an ability to use all his senses to connect with the plants, animals, and the flow of the seasons; this ability provided him with the foundation that would eventually aid phenological studies 150 years after his death. Dunlap details Thoreau’s upbringing and some of the historical figures (lesser and well-known) who would have an impact on his life and writing. Baratta’s glorious illustrations, time lines highlighting Thoreau’s observations, and Thoreau’s own words evoke a sense that readers are exploring the mind of a man with a deep respect for all life and stages in the cycle. Readers will not only come to appreciate, as Thoreau did, the beauty in nature and simplicity, but feel inspired to treat the earth and its inhabitants with kindness as well.VERDICT An engaging and inspiring biographical title for budding scientists, artists, and environmentalists.

How can one man living in a cabin in the woods make any kind of a difference? The life and writings of Thoreau are explored in a playful, engaging notebook of a book, showing his influence both then and on people today. This is a dive into the life of Henry David Thoreau, but told in such a way as if you were you reading through one of his journals. There’s a running timeline on the bottom of the pages as the seasons pass noting when the first bank swallow is seen or when he collected white pine cones. It makes a pretty strong case not simply for why David’s life was important (civil disobedience and his vehement dislike of slavery are cited multiple times) but also his work. I found the backmatter on how current climate change scientists are able to use his meticulous notes fascinating. I do wish there had been some mention of the fact that yeah, he lived in the woods but his mom did all his laundry, but all told it’s a strong piece with some killer backmatter. A must read!

"Dunlap begins her illustrated biography with a question posed by Thorea in a school report, his earliest known writing: “Why do the seasons change?” She anchors the book solidly in primary-source material, following Thoreau’s copious recorded observations of nature, including his classic work Walden, crafting an insightful and vivid portrait for readers. Baratta’s delicately detailed illustrations, which appear to be rendered in watercolor and ink, feature the birds, butterflies, trees, and other parts of nature Thoreau talked about in his journals and letters; each specimen is carefully labeled with its common and/or scientific name (such as “birdsfoot violet / Viola pedata”). A timeline runs across the bottom of many pages, marking days of the year as the book moves through the seasons with specific notes Thoreau made on a particular day: “June 5, Woodpecker nest in apple tree.” Dunlap discusses the importance of her subject’s work in a modern-day study of climate change, encouraging readers to become citizen scientists and record what they see, too. The biography reflects not just Thoreau’s interest in natural history but also his political stances (he and his family were passionate abolitionists), his interest in scientific thought (he read On the Origin of Species with keen interest), and his relationships with other notable contemporaries, including Ralph Waldo Emerson and Louisa May Alcott. An excellent introduction to Thoreau and the turbulent times in which he lived.From the May/June 2022 issue of The Horn Book Magazine."

Henry David Thoreau spent many years observing seasonal changes in the natural world; now, a new biography for young readers chronicles the seasons of his life.The book begins with a description of Thoreau’s outdoorsy childhood spent collecting wildflowers, leaves, and seeds on his grandmother’s farm in Concord, Massachusetts. As a teenager, Henry explored the small town’s rivers and wetlands and “learned the voices of birds, frogs, and insects too.” After studying Greek, Latin, and German at Harvard, he taught at the district school until his beloved brother’s untimely death forced him to reevaluate his life. He started journaling and writing essays and poems inspired by his excursions in nature. Determined to carry out an “experiment” in “living more simply,” he dwelled by himself in a tiny house at Walden Pond for two years. The narrative goes on to describe Thoreau’s writerly life and literary accomplishments; his foray into land surveying; his public lectures; his involvement in the anti-slavery movement; and his many adventures and groundbreaking contributions as a naturalist. Dunlap’s generous text unfolds at a leisurely pace and excels at narrative despite being nonfictional. It puts Thoreau’s lasting legacy into context, establishing his influence on Martin Luther King Jr. and the modern environmental movement. Never overdrawn, Thoreau comes across as a thoroughly modern individual, quirks and all. The book’s layout approximates a nature journal; the pages are riddled with labeled watercolor sketches and handwritten field notes. Facsimiles of primary documents are interspersed throughout, bringing 19th-century Concord to life. A marvelous life survey of a perennially relevant historical figure. (author’s notes, resources) (Illustrated biography. 7-12)

...With a deep nod to the mid-19th-century nature journal, it’s an
absorbing life history of the formidable philosopher, naturalist, and
humanist, and it exemplifies narrative children’s nonfiction at the
height of its powers.
— Summer Edward - Kirkus