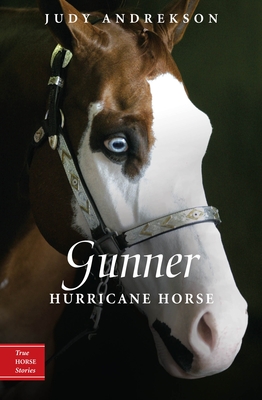 This is book number 1 in the True Horse Stories series.

Each book in the True Horse Stories focuses on a contemporary horse from a different part of the world, and each animal is, in his or her own way, a hero.

PBJ Decks Smokin Gun (Gunner) is an American Paint Horse, one of the many of Heather Lott Goodwin's herd, and a valuable show animal that won the World Championship Paint Horse title. When Hurricane Katrina passed over the Goodwin property, it took with it the fences, the cattle, and several horses. Heather and her family lived in their horse trailer for six weeks and considered themselves lucky to have safe, comfortable shelter. After the storm, they searched for the animals and recovered many of them. But three months passed before they located Gunner, a hundred miles away. They were told he was in terrible shape and should be put down. Nevertheless, Heather drove on washed-out roads to bring him home, starving, dehydrated, and blind in one eye. With the help of a vet and her mother, she nursed him back to health. Amazingly, nine months later, he was well enough to compete again in the World Championship Paint Horse Show. Gunner's story is a testament to love and to determination.
JUDY ANDREKSON grew up in Nova Scotia with a pen in one hand and a lead rope in the other. At twenty, she moved to Alberta and found her dream job managing a thoroughbred racing/breeding farm. By her thirties, she had also begun to write. She combines her passions in her True Horse Stories. Judy Andrekson lives in Sherwood Park, Alberta, with a constantly changing assortment of animals.

DAVID PARKINS is the award-winning illustrator of over fifty children's books. He began his career at Dyfed College of Art in Wales, studying wildlife illustrations. He has been an illustrator since 1979 and drew the British cartoon, Beano. David Parkins lives in Kingston, Ontario.
Praise For Jb Andrews: Mustang Magic:
"This is a gripping story, full of tension and real life descriptions."
— Highly Recommended, Canadian Review of Materials

Praise For Miskeen: The Dancing Horse:
"Andrekson really embraces the storytelling heart of her material with a high degree of emotional engagement, complicated relationships and issues, and a well-realized personality."
— Sarah Ellis in Quill & Quire

Praise For Little Squire: The Jumping Pony:
"This is a lovely book and I would recommend it not only to horse lovers, but to young readers who enjoy historical fiction."
— Highly Recommended, CM magazine

"Andrekson excels at vividly recreating the lives of horses she writes about for her readers . . . "
— Excellent, Resource Links